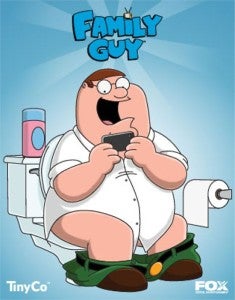 Twentieth Century Fox and TinyCo recently put out a press release to announce the creation of a brand new Family Guy mobile game, which will be released in 2014. In the main section of the press release, there is no mention of Brian Griffin, who was recently killed off in a controversial episode of Family Guy. Twentieth Century Fox and TinyCo focused on Peter Griffin in both the image and the quotes released in relation to the new mobile game.

"Mobile platforms are a new frontier for engaging with your favorite characters and worlds," said Rick Phillips, who is SVP at Fox Digital Entertainment. "With more than a decade on the air, Family Guy has built a world like no other with some of the most beloved characters in entertainment today. This game will bring the best of the Family Guy experience to mobile gamers all over the world."

"It's really fun!" said Family Guy star Peter Griffin. "Plus, if you play it for more than three hours it counts as going outside!"

"Family Guy is an amazing show that's famous for its sharp wit, unpredictable storytelling, and hilarious cast of characters," said Suli Ali, who is CEO of TinyCo. "We're capturing that essence and providing players with an awesome way to get their Family Guy fix every day."

According to TinyCo, the Family Guy mobile game will allow players to travel through Quahog, recruiting (and sometimes confronting) their favorite Family Guy characters along the way. TinyCo is working directly with the Family Guy show writers, and the game will feature an all-new, original story influenced by the show's 212-episode catalogue as well as current events.

Even though there is no mention of Brian Griffin in the main part of the TinyCo's press release, the about Family Guy section of the press release is very telling.