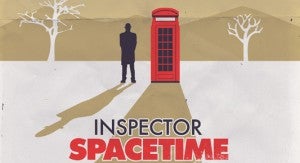 Who needs Constable Reggie when you've got Amy Pond? Karen Gillan, who plays Dr. Who's companion Amy Pond in the current iteration of the long-running British sci-fi series, posted a video to YouTube earlier today expressing an interest in appearing on Community, NBC's fan-favorite sitcom that has just been renewed for a fourth (and final?) season. In the context of Community, pop-culture junky Abed Nadir (played by Danny Pudi) is a huge fan of Inspector Spacetime, a thinly-veiled spoof of Dr. Who that features the titular Inspector and a series of companions battling "Blorgons" throughout time and space while wearing a bathrobe and a bowler. Generally Inspector Spacetime and Constable Reggie are depicted by Abed and his friend Troy Barnes, played by Ultimate Comics Spider-Man inspiration Donald Glover. Back in February, a group of rabid Community fans produced an Inspector Spacetime webseries during the show's hiatus. The unexpected popularity of Inspector Spacetime with Community fans has led to official merchandise coming out of NBC, as well as quite a bit of riffing among Doctor Who fans and creators ever since the concept first hit the airwaves. Gillan says that she wasn't even aware of Community until Inspector Spacetime came to pass, but that she's now an avid fan. The show has been embattled almost since it began, with ratings troubles, off-camera controversies and a rumor this week that showrunner Dan Harmon may be ousted for the show's fourth season, but it's been a critical darling and a favorite show among fans, who voted it Hulu's Best in Show earlier this year. Community's three-part season finale airs on Thursday night--but who thinks an Inspector Spacetime-themed episode might be a great season premiere in the fall? Gillan's video urges fans to tweet the Twitter hashtag #amymeetsabed if they want to see it.

Dr. Who's Karen Gillan Wants to Be On Community