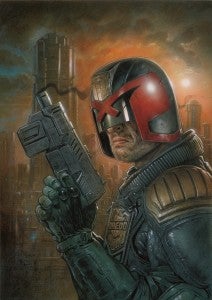 , a digital comic prequel to the forthcoming Lionsgate film Dredd 3D, made its debut online today at the movie's Facebook page, along with a motion comic that adapts the first chunk of the story below. The story, set in the world of the Dredd feature film rather than in the continuity of the 2000 AD stories where Judge Dredd regularly appears, explores the ascendance of Madeline Madrigal, who would later become known as Ma Ma. She's the central antagonist of the film, played by Lena Headey. In the comic, we get a sense for how she got to be such a dangerous, repugnant individual. In the context of the movie, Ma Ma is a former prostitute who turned to pushing drugs and who now lives at the top of the Peachtree community high rise as the undisputed ruler of the neighborhood, a position her drug money and the muscle it buys have earned for her. Karl Urban and Olivia Thirlby plays Judge Dredd and his rookie trainee Judge Anderson, who enter the complex in the hopes of solving a grisly murder that Ma Ma is tied up in. Check out the comic at the links above; Dredd 3D is due in theaters on September 21. We were lucky enough to see the film at San Diego Comic-Con International back in July and trust us, it does not disappoint. "If Die Hardand Sin City had an awesome, brilliant, violent baby, this film would be it," wrote ComicBook.com at the time.