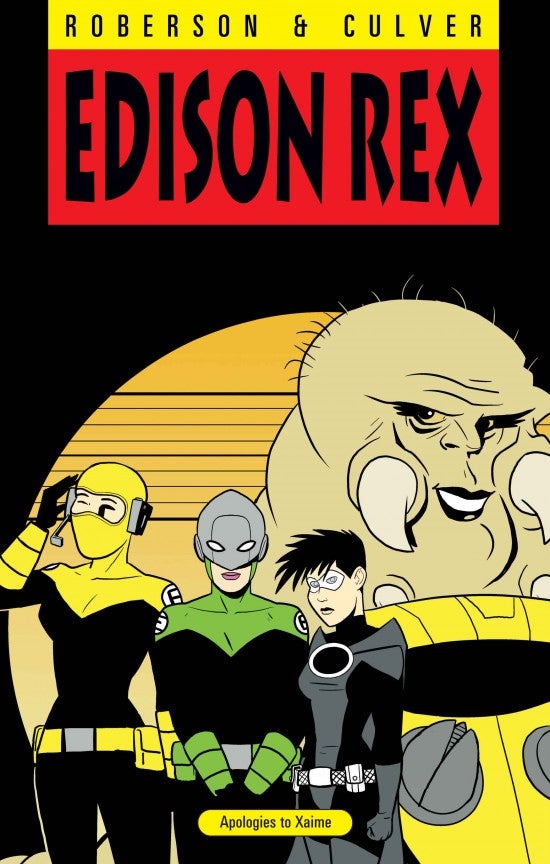 If it seems like it's been a while since we caught up with Edison Rex creators Chris Roberson and Dennis Culver, that's because the start of convention season and hectic schedules on all sides briefly waylaid our monthly creators' commentaries on Edison Rex, the fun, smart and increasingly meta superhero book from Roberson's Monkeybrain Comics. There was a calm in the storm, though, and over the next couple of days we'll bring you some analysis of both Edison Rex #14 and #15. Today, we'll take a look at Edison Rex #14, a loving send-up of the indie classic Love and Rockets. The issue, told as a series of vignettes, cuts back and forth between a handful of characters, revealing some of the personalities in the world around the title character. Reminder: These conversations are very spoiler-intensive. If you haven't read Edison Rex #14 yet, go buy it at ComiXology, and then come back here to read along with us. 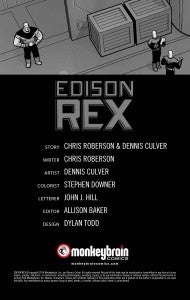 I do enjoy a good homage cover. What gave you guys the idea for this one? Chris Roberson: We talked about the idea of a series of short-short stories for a long while. I was thinking of it in terms of Robert Altman, I think, but Dennis was the one who suggested Jaime Hernandez's Locas stories as a model. Dennis Culver: Once we had the outline for the issue set. The cover was the most logical thing to do. ComicBook.com: Why did it take Edison so long to finally raid Valiant's fortress? Was it just a matter of suddenly realizing how much dangerous crap was left unsupervised here after their last visit? Roberson: I thought of it in terms of spring cleaning. Like, he's had this storage unit filled with someone else's junk that he inherited a while back, and he's just not getting around to dealing with it. Culver: I think he considered a lot of it inferior junk too but once Maul Santa and Rofl escaped out of there and caused problems I imagine he gave it a second thought. Also, dude is busy saving the world. ComicBook.com: How do you balance issues like this one, which seem to have their own agenda and don't necessarily serve the larger narrative as much as provide enjoyable tangents, with the desire to get somewhere specific with the story? Roberson: Actually, this issue is doing more to advance the larger agenda than you might think, in more ways than one! We've just cleverly disguised it as a bunch of character-centric vignettes, when really we're just getting all of the chess pieces in position on the board for the big checkmate gambit that's rapidly approaching. Culver: Everything in Edison Rex counts. We aim to make a series that you can read over and over again. There are hints everywhere about upcoming issues if you know where to look. 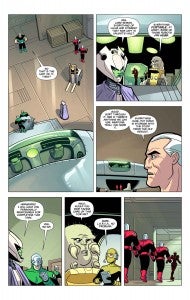 Is that an area where it's nice to not have a publisher breathing down your neck? You're the boss, and you KNOW it's all going to work out. Roberson: If anything, that means that we're carrying more weight on our shoulders, since we have no one to blame but ourselves if it DOESN'T work out! Culver: It fall on us to keep it all straight but between the two of us we manage all right. ComicBook.com: I love the Human Garbage design. Was that a matter of having a fun design and just plugging him into a story, or of syncing a story beat/name with a look? Roberson: That was all Dennis. Dennis, what do you say? Culver: HUMAN GARBAGE is one of the Eclipse's rogues gallery. We actually know who a fair amount of those folks are in that corner of our world. We're always looking for ways to hint at the larger Edison Rex world. There's all kinds of heroes and villains out there mixing it up off screen every single issue. HUMAN GARBAGE was a good way to subtly tie us into the next short and who doesn't love a character named HUMAN GARBAGE. 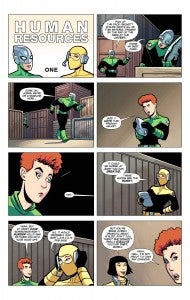 With the Eclipses working on decrypting the Rexfiles, that certainly seems like it creates a risk given what we know from last issue, doesn't it? Roberson: It does at that, doesn't it? Mmmm… Culver: Not just last issue either. ComicBook.com: I love the homage to "For the Man Who Has Everything." What are you guys going to do for my birthday Friday? Will it be horrible? ;) Roberson: Only if your true heart's desire is for something horrible. But that's entirely up to you! Culver: BURN.

Edison Rex: Catching Up With Chris Roberson and Dennis Culver, Part One