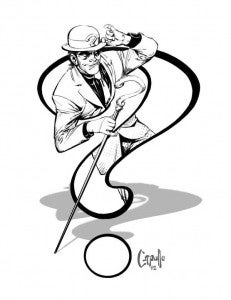 Last night at Emerald City Comic Con, Batman writer Scott Snyder appeared at the DC Comics All Access panel to discuss, in part, his next big Batman story. He promises an 11-part story beginning with issue #21, something that will run until #31 and seems to suggest that while they recently changed inkers, both Snyder and series artist Greg Capullo will be on board for another year at least. "This really is a really ambitious, crazy story that will be announced in about two weeks...I really believe it's our boldest story. I asked 'Can I spoil it?' and they said no. But it really is my favorite thing," Snyder told fans at the convention. Before that, the writer said that this month's Batman #18 will deal with the death of Damian Wayne, as seem through the eyes of Harper Row, the character most fans speculate will be the next Robin. The writer said that he wanted to allow Peter Tomasi to deal with Bruce Wayne's reaction in Batman & Robin, something that Tomasi has already discussed. After that, he said that there will be two issues at are a bit more fun, a break from the relentless parade of suspense and negativity in the title during Death of the Family and  the fallout from the death of Robin. While he couldn't specify what the story in question was, it seems likely that the story will feature The Riddler. Back in July 2012, the writer teased that "I will use Riddler in 2013."  The character appeared briefly in Death of the Family, but an origin story has been rumored to be coming along soon, and Greg Capullo recently posted the image above to Twitter.