In the not-too-distant past, we've discussed topics here ranging from whether fans would rather see their favorite characters rolled into team books rather than continuing on in a solo series that's a shadow of its former self to what scrapped TV shows would make good comic book comebacks. One thing that was touched on but not really explored in those stories was taken up as the subject of Entertainment Weekly's Contrarian Corner this week: Should these things be rising from the dead at all? 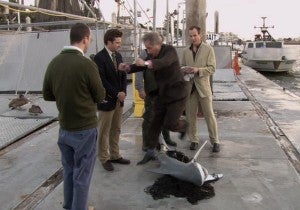 In a story that indicts not just the back-from-the-dead Family Guy and Futurama (saying, in part, that Adult Swim served as a launchpad "where the grace of lowered expectations transformed them from broadcast flops to cable hits"), but the efforts by fans and creators to return shows like Arrested Development and Party Down to production, writer Darren Franich poses the question: Isn't it better to have a handful of magical episodes, than to have a show continue well past its expiration date and become a zombie? As Jack Black's Barry from High Fidelity asked of aging musicians, Is it better to burn out than fade away? It's Franich's contention that it's almost inevitable that these much-anticipated relaunches (Arrested Development will become an ongoing series again, produced and made available by Netflix, while Party Down will apparently become a feature film) will disappoint fans and tarnish the legacy of great shows that may have died too young, but at least left a good-looking corpse. While his article focused on these and a handful of on-the-bubble TV shows that are likely to start generating similar buzz soon, the question is equally applicable to the comic book landscape in 2012, where the DC relaunch and a decade or so of Marvel movies have brought old concepts back to life with a vengeance. There is a long history of creators returning to the concepts that made them famous, with mixed results, but it seems as though this is a bigger and bigger part of development strategy in today's comics, as the industry flags economically and publishers look back to the gilded age of the pre-crash '90s as the last time their wares were ending up in millions of hands. But Dan Jurgens's return to Superman isn't what we're getting at here. There was, actually, a series of books that literally rose from the dead during the Blackest Night storyline, in keeping with the theme of the Geoff Johns-penned mega-crossover, and that's as good a place to start as any. Just like the examples in the Franich article, most of the titles--which included a number of titles including Suicide Squad, Catwoman and Weird Western Tales, which all came back again with the New 52 relaunch--failed to impress fans or critics, leaving a sour taste in the mouths of all involved. Slightly better was DC's even-more-recent spate of DC RetroActive specials, which resurrected not just the comics but also the creative teams in question (something that only one or two of the Blackest Night tie-ins did). About half of those were pretty good, but the spotlight there was firmly on DC's most popular handful of properties and didn't really "bring back" anything that was missing from the current lineup. 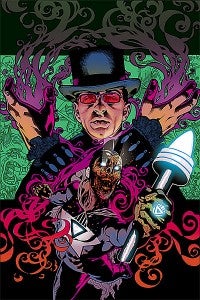 A notable inclusion in the Blackest Night revival (if for no other reason than the fact that it set the stage for stories still currently unfolding) was Starman #81, which featured The Shade and was written by the man who made Starman a household name for DC fans, James Robinson. The general consensus was that while this book may not have been strictly necessary, Robinson handled it well and it felt as though he hadn't missed a beat. This was particularly interesting given that none of Robinson's projects since Starman had enjoyed the same level of universal acclaim that Starman had, and many of them in the immediate run-up to the Blackest Night tie-in were widely panned. The issue didn't actually feature the Jack Knight Starman, but instead revolved around the beloved supporting character of The Shade, who took on a Black Lantern Starman (also not Jack). Even while happily reanimating the series to get up and dance for the fans, Robinson maintained that Jack Knight's happy ending should be retained. When it was shortly thereafter announced that The Shade would have his own miniseries (which launched just a few months ago under the aegis of the New 52), fans rejoiced and, so far, it's been worth the wait. Not so for Manhunter. When Marc Andreyko's fan-favorite but sales-challenged comic was canceled the first time, DC received angry letters, pointed questions at comic conventions around the country and 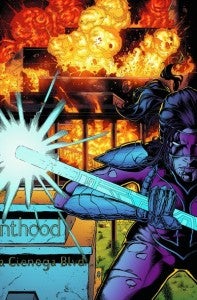 criticism from readers and journalists who accused the publisher of pushing out a strong female lead, dumbing down the state of superhero comics and any number of other things. The book returned for a brief run meant to tie up loose ends and give some closure to the fans, and continued support for the characters and Andreyko resulted in sales good enough for DC to take another chance on it. After artist changes and delays, though, the title limped back into shops without a new #1, nearly a year after it had last been published and with what appeared to be pretty severe restrictions on what could be done. Its eclectic supporting cast--which made the book what it was in many ways--was mostly gone, replaced by a revolving door of third string DC heroes meant to either help sales or endear themselves to Manhunter's ardent fan base. They did neither and after a clumsy and plodding six issues, the book was once again canceled. Like the first two times, fans and critics grumbled--but unlike the first two times, they weren't motivated enough to write letters or pick fights. After all, the diminishing returns that had come out of each subsequent resurrection had left them with a bad taste in their mouths and a fear for what might come next if it hobbled back to life again. It actually did so, as a "second feature" in Batman: Streets of Gotham, but while it was a huge improvement over the self-defeating issues #31-36, much of the magic was gone when the character was stripped of her beloved supporting cast and dropped into Gotham in the hopes of making her more marketable. The comic disappeared again when the Second Feature program did and has not been collected. 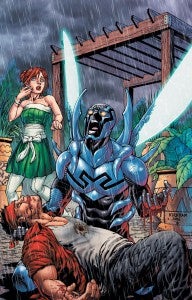 fans are struggling with similar disappointment now, as Jaime Reyes has returned to the pages of his own monthly in the new DC Universe, but with a writer who just doesn't seem to get him. Tony Bedard, who has deftly handled young heroes in the past and is just coming off another brilliant-but-canceled DC series in R.E.B.E.L.S., seemed on paper like the perfect choice for Blue Beetle and even delivered a pretty darn good first couple of issues as he reinvented Jaime from the ground up, eschewing the Infinite Crisis portions of his backstory that no longer made sense in the revised DC timeline. As was discussed on last week's Why I Love Comics podcast, though, as the series has progressed, Jaime's relationships with his supporting cast and family have strayed substantially from what they were in the John Rogers/Keith Giffen monthly. He's less fun, less relatable, more angst-ridden and ultimately Bedard seems to have taken a truly unique title and transformed it into something that reads like...well, everything else. Obviously there are other reasons for resurrecting old concepts and properties, too; DC's 2009 resurrection of Warlord allowed creator Mike Grell to finally finish off a story he started telling when he created the character three decades before. Marvel had similar critical success (and similarly limited financial success) in giving some old creators a chance to repair one of their more egregious errors when they gave Howard Mackie a mulligan on Spider-Man's Clone Saga. In the coming year, Marvel is hoping to recapture some of the magic of their popular Age of Apocalypse storyline from the '90s by launching not only an omnibus hardcover collecting the original material but an ongoing, monthly series set in the alternate timeline of the story. DC, basking in the success of books like The Shade and I, Vampire, has already announced the return of Marv Wolfman's Night Force. Whether these relaunches can be successful remains to be seen--for every success story in comics there's an equally-depressing tale of Mark Waid's brief return to The Flash, for instance--but if they don't, we fans have only ourselves to blame. After all, we asked for it.

Entertainment Weekly: Be Careful What You Wish For?