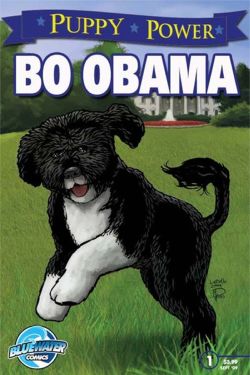 You've probably heard of Superman's dog, Krypto. You may have even heard of Batman's Dog, Ace the Bat-Hound. Now, get ready for the latest canine sensation in comic books. Yes, President Barack Obama's dog Bo is getting his own comic book. In a weird kind of way it makes sense. Both President Barack Obama and First Lady Michelle Obama have already had their own comic books. One might expect the Obama children to be next to get their own comic book, but after the uproar over the beanie babies of the Obama children, the kids are likely off-limits. That leaves First Dog Bo Obama and Vice-President Joe Biden as potential comic book stars, and they are both getting their own comic books from Bluewater Productions. How embarrassing for VP Biden will it be if the First Dog's comic book sells better? Puppy Power: Bo Obama is scheduled for release in September. The First Dog comic book is written by Paul J. Salamoff and drawn by Emmy Award winning Disney and Warner Brothers artist Keith Tucker. Puppy Power: Bo Obama is aimed at children and will present an insider's look at the White House. The comic book will have two covers by Female Force: Michelle Obama artist Joshua Labello and Keith Tucker. Political Power: Joe Biden will also be released in September. The Biden comic book is written by Wey-Yuih Loh with art by Jonathan Rector. The cover is by Vinnie Tartamella. Political Power: Joe Biden explores Biden's earlier years as a US senator and the emotional rollercoaster he faced in becoming America's youngest member of congress.

Even President Barack Obama’s Dog Has His Own Comic Book