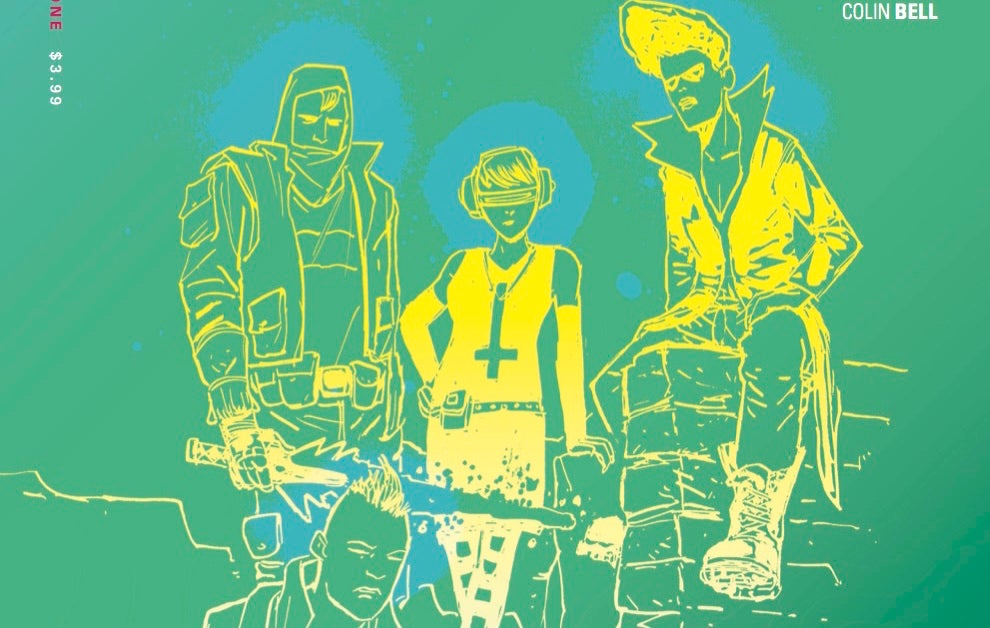 Dystopian futures are a staple of comic book storytelling, but rarely do their concepts sink beyond the surface level. The future may be dark, but why? What does it point back to in modern society, like the great works of Fahrenhite 451 or 1989?

Fortunately, writer Curt Pires looks to dig a little deeper in his upcoming epic, The Tomorrows. Using today's biggest social and political issues as a forecast into a bleak tomorrow, Pires' (of Pop fame) story finds a future where the rich are only richer, the vocal are muted, and those foolish enough to use social media will never be safe. Sound a little too familiar for comfort? It should.

Another, if less bleak, trend that Pires will incorporate into his series is a rotating cast of artists. With a different illustrator imagining each of Pires' scripts, each issue aims to be as much a statement from the artist as the writer. What better way to depict a future where art is illegal.

Below, Pires discussed with us how Transmetropolitan and Facebook inspired the series, what each artist will bring to the table, and how indie-pop singer Grimes is oddly relevant to the series' mission.

What's the overarching concept of The Tomorrows?

The Tomorrows is about the future we're heading towards. A future where our government, it's institutions (Hello, NSA) and private corporations akin to Facebook and Apple have mined and categorized our data to the point where it is actively and constantly used against us. Add to the mix an increasingly totalitarian and oligarchical political system (where art has been declared illegal) largely born out of 21st century big banks, on top of wealth and greed's triumph over the common good, and you get one thing: our dead future.

Not everyone is okay with this. Meet The Tomorrows. Artists. Poetic Terrorists. Heroes. Villains. It really depends who you ask.

Wow. So where did you find the inspiration to tackle these relevant issues?
It came from within myself. It's a story I've been developing and ruminating on since about 2012--and post POP I finally felt like I was ready to tackle it. I was looking back on comics when titles like The Invisibles, Planetary and Transmetropolitan--all these boundary pushing comics that really had something to say—were coming out. It made me wonder: What happened to that? Where did comics like this go? I decided to solve the problem myself, and make this book.

Was it always your intent to have a different artist cover each issue in the series?
That was something that evolved as I developed the idea. Years back I initially thought of it as a one-artist book, but as time went on and I got to talking to artists, and thinking of the scope of the story itself, it became clear it was a story that would call for many artists. Then, looking at projects like Global Frequency, Multiveristy, and even the still ongoing (and great) "Zero" by friend Ales Kot, I realized this structure would work.

Could you describe how each issue will reflect the strengths of each individual artist?

Issue One: Originally about three issues of story, shrank down to 28 pages, because I know and trust Jason completely, and we can do anything.

Issue Two: My desire to see Alexis Ziritt cut loose, get raw, and get violent. Also some hyperdense planned moments.

That's just the first three issues. It goes on and on. I'm always looking at the artist's work, and learning to make the best art I can, with my brilliant collaborators. A key to that process is looking, talking, and learning what works.

And I want to note that these first six issues form the first "volume" of the larger story I am going to tell with The Tomorrow. They form a whole story, but it's also only the start.

Awesome. Who fills out the Tomorrows' roster, and what does each member add to the overall dynamic? Were any of the characters inspired by something or someone else?

The team, when we meet them, is comprised of three members. There used to be more. A lot more.

Claudius: The leader. Although the team is really a "fluid" structure. Everyone leads, and everyone follows. There's no hierarchy.

Sasha: She's sort of everything. She's brilliant, can kick ass, has great hair, and is probably the most in tune to the events that are circling the team that they don't notice yet.

We'll also meet Zoey in the first issue. She's not a member of The Tomorrows yet, but she might become one. She's an artist. Despite the illegal nature of art, there's things in her she needs to put out.

The cast grows and expands from there.

The solicit text describes this world as the "New Reality." Could you explain what that is, and how it will factor into to the overall story?

To be precise, the solicit says: "Welcome To The New Reality," as in, we are going to be creating one. It's a minor distinction but an important one. Where does that come from? Again, it comes from again me looking at ongoing science fiction narratives and ongoing comics, then looking within myself, and noticing trends and patterns within the information.

There's a tendency these days to put out Science Fiction without really thinking about the social or political implications of said fiction. I mean how many Dystopian science fiction comics have we seen drop the last decade? How many showing an accelerated future? "Our Doomed Future". Right. I actively find myself thinking about the things I put into this world, the things I create. I am not content with dropping a book that shows the future I believe we are heading towards as a concrete structure. Reality is fluid--in flux--"hackable" (Pop, Issue Two Page Twenty) so I'm looking at this future, and I'm looking at my collaborators, and I'm saying "Let's create something more beautiful". The future is, and can, be whatever we want it to be. And I'm inviting everyone to co-create it with me.

Interesting: How is The Tomorrows different from your past series, like Pop? How has it pushed and developed you as a comics writer?

Every project pushes, develops, and takes me in new directions. In the case of this project, it's much more epic in scale and size and in concept than POP, but I'm still holding onto the feeling--the intimacy of something like POP. Big stories are only effective if they remember to make us care.