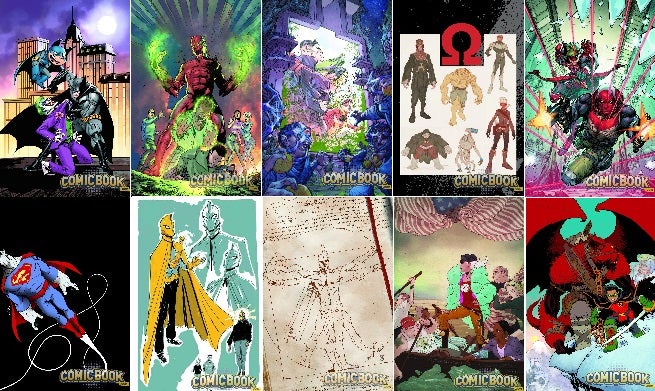 DC Entertainment has provided ComicBook.com with an exclusive first look at ten of their June 2015-launching solicitations, including anticipated new #1 issues like Bat-Mite, Bizarro and Robin, Son of Batman.

A number of these titles had already had art released, but this marks the debut of almost all of the solicitation text and a number of the covers.

Possibly the biggest revelation contained herein? What appears to be a 31st Century version of Guy Gardner (although...female?) in Justice League 3001. Facing off against Starro the Conqueror might bring some memories back, too.

...And is this the final fate of Kyle Rayner?

You can check out the selected solicitation text below.

Retailers: This issue will ship with two covers. Please see the order form for more information.

Bat-Mite is here to fix the DC Universe – one hero at a time! Convinced that he's the imp that put Batman on the map, he's spreading his expertise all over the DC Universe, eager to boost the careers of heroes he thinks need his "help." Don't miss the start of this six-issue all-ages miniseries!

"Hate HARLEY QUINN? Then you will super hate BIZARRO! Bizarro star of worstest comic ever! Go ahead and miss it! If there's one thing this issue not have it these two things: Jimmy Olsen and Chupacabras!" Don't miss the start of this six-issue all-ages miniseries!

Retailers: This issue will ship with two covers. Please see the order form for details.

In this startling new series, a Metropolis U student gains the power to transform into the monstrously powerful Doomsday! The power may be the key to fixing his life, but every time he transforms he risks getting stuck forever as Superman's most heinous adversary! How far can he go before he's doomed?

You thought global warming was bad? Anubis, the Egyptian Lord of Dead, is preparing the flood to wash the world away. Standing in his way? An overwhelmed Brooklyn med student who's been handed the helmet of Fate, without an instruction manual.

Travel even deeper into the future than before with the all-new JUSTICE LEAGUE 3001! They've managed to become the World's Greatest Heroes of the 30th century, but with legions of foes gunning for them, can they stay alive long enough to see the year 3002?

Shape-shifting Martians are invading Earth – so where is J'onn J'onzz to stop them? Trust no one as the Martian Manhunter tries to stop these ruthless alien terrorists from destroying everything!

The Omega Men are back in an all-new series! They've murdered White Lantern Kyle Rayner and now, the universe wants them to pay! Who are these intergalactic criminals – and is there more to their actions than meets the eye?

Meet Beth Ross, the first teenaged President of the United States. In a nation where corporations can run for office, the poor are used as human billboards, and tacos are delivered by drone, our only hope is this nineteen-year-old Twitter sensation. But the real question isn't whether she's ready for politics – it's whether politics is ready for her. Don't miss the start of this new, 12-issue miniseries!

These brothers in arms face off against incredible odds while burning their way through the underbelly of the DC Universe – and it's only a matter of time until they get gunned down in return!

The son of a Bat and a Demon, Damian al Ghul has set out to forge his own destiny – and atone for the shameful Year of Blood! Will he be aided or hindered by the behemoth Goliath? And what mysterious legacy trails behind him? Join writer/artist Patrick Gleason as he chronicles the globe-hopping adventures of ROBIN: SON OF BATMAN!