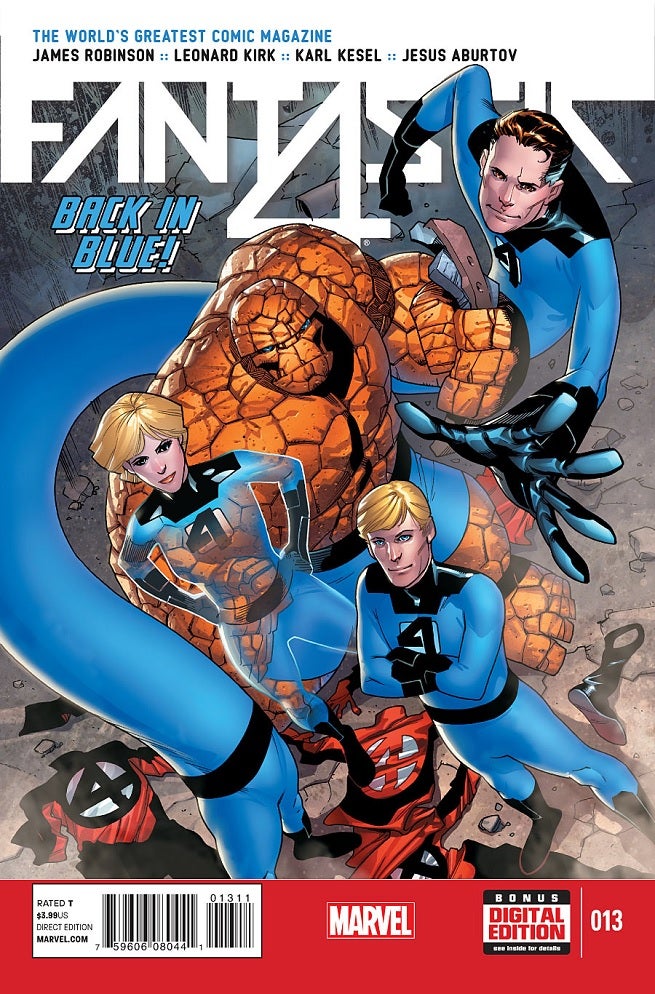 If you aren't reading this series yet, I don't know what else to tell you. As a fan of the FF, I've been thoroughly digging this run since I feel it hit its groove just a few issues in. It's got a lot going for it. In fact, I've so much positive to say and so little that's negative, I think I'm just going to forgo my usual review format of "Good," "Bad," and "Questionable" and just free-form discuss the issue. So, let's dive in. I'm going to try and keep any SPOILERS on the mild side but just be aware that I will likely discuss the status quo going into this issue.

Writer James Robinson, artist Leonard Kirk, inker Karl Kesel, and Jesus Aburtov have been firing on all cylinders since Kirk came back from his brief hiatus and this issue is no exception. Like just about every issue of this run, this book deftly juggles a number of intertwining subplots featuring a fairly large cast of characters and at this point the tension is becoming even more palpable as the plot winds its way toward its inevitable conclusion. 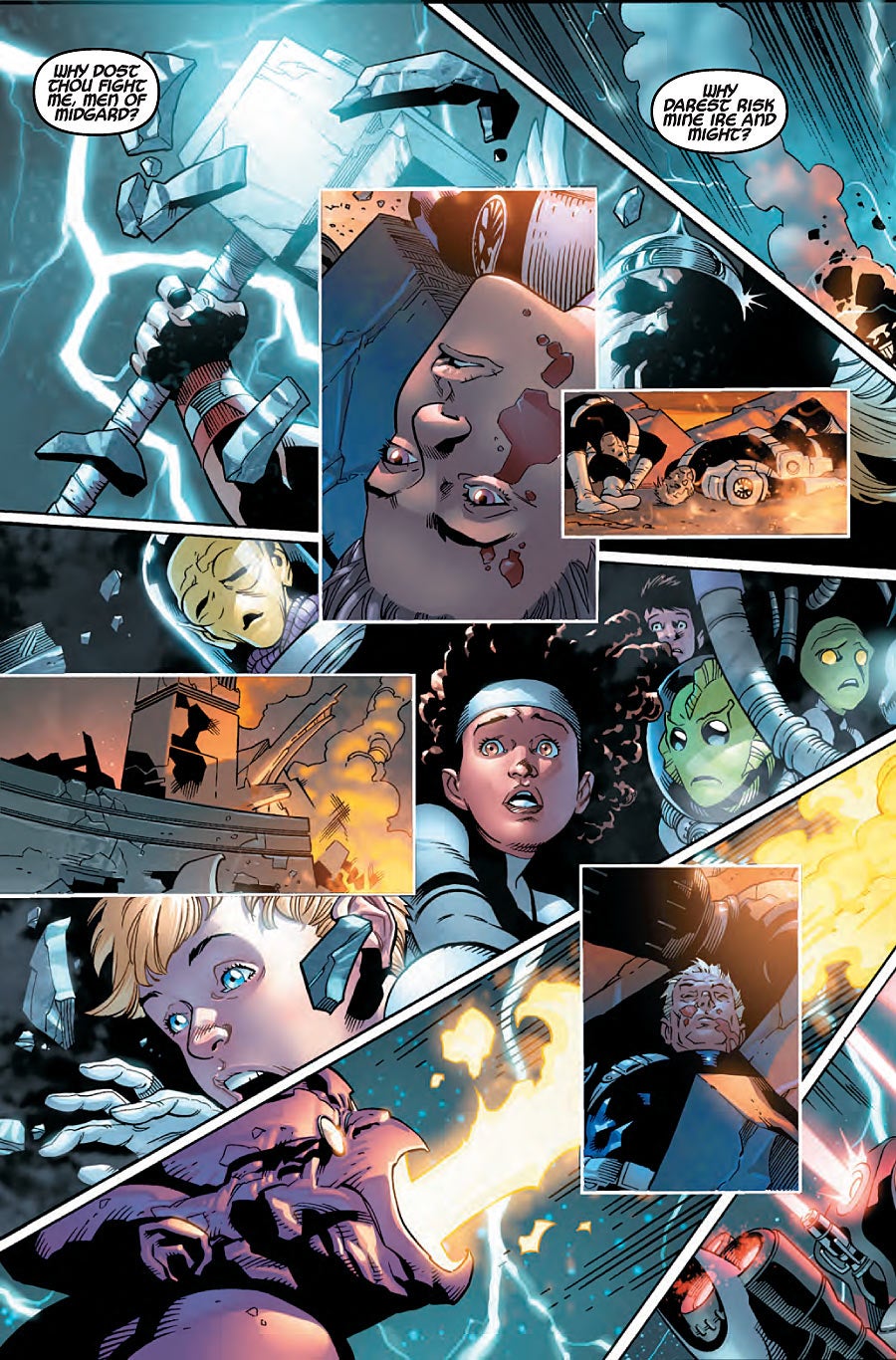 One of the things I love about this run is that it remembers that it is part of the Marvel Universe. Part of the fun of existing in a 50 to 75-year-old (depending on your perspective) multiverse constructed from an unending persistent narrative is that a lot gets established over time and there are always elements of the reality that one can pull from to enrich one's story. It's the richness of the Marvel U and its history as well as the idea that the books that are currently being published exist more-or-less simultaneously that are some of its strongest selling points. Of course the idea that characters like Wolverine and Spider-Man can hold down multiple team membership and be engaged in multiple continuing storylines at any point in time stretches credulity, but if we believe that the nebulously defined cosmic rays can turn a set of astronauts into a universe's premiere super team then I think we can suspend out disbelief thus far.

Anyway, it is this richness that Robinson exploits to make this run feel new and refreshing, yet familiar at the same time. It's a run that is friendly to new readers while rewarding longer-term fans. I've half-jokingly said before that Robinson is doing the impossible by crafting a solid run from reintroducing secondary cast members and potentially poisonous plot elements, but it's really much more than that. This run is a celebration of the FF, their history, and the characters they have touched over that history. The FF has always been and been about family, here though we see almost the entirety of what one might call their extended family come into play all while the plot touches on many elements of the team's history both great and small. 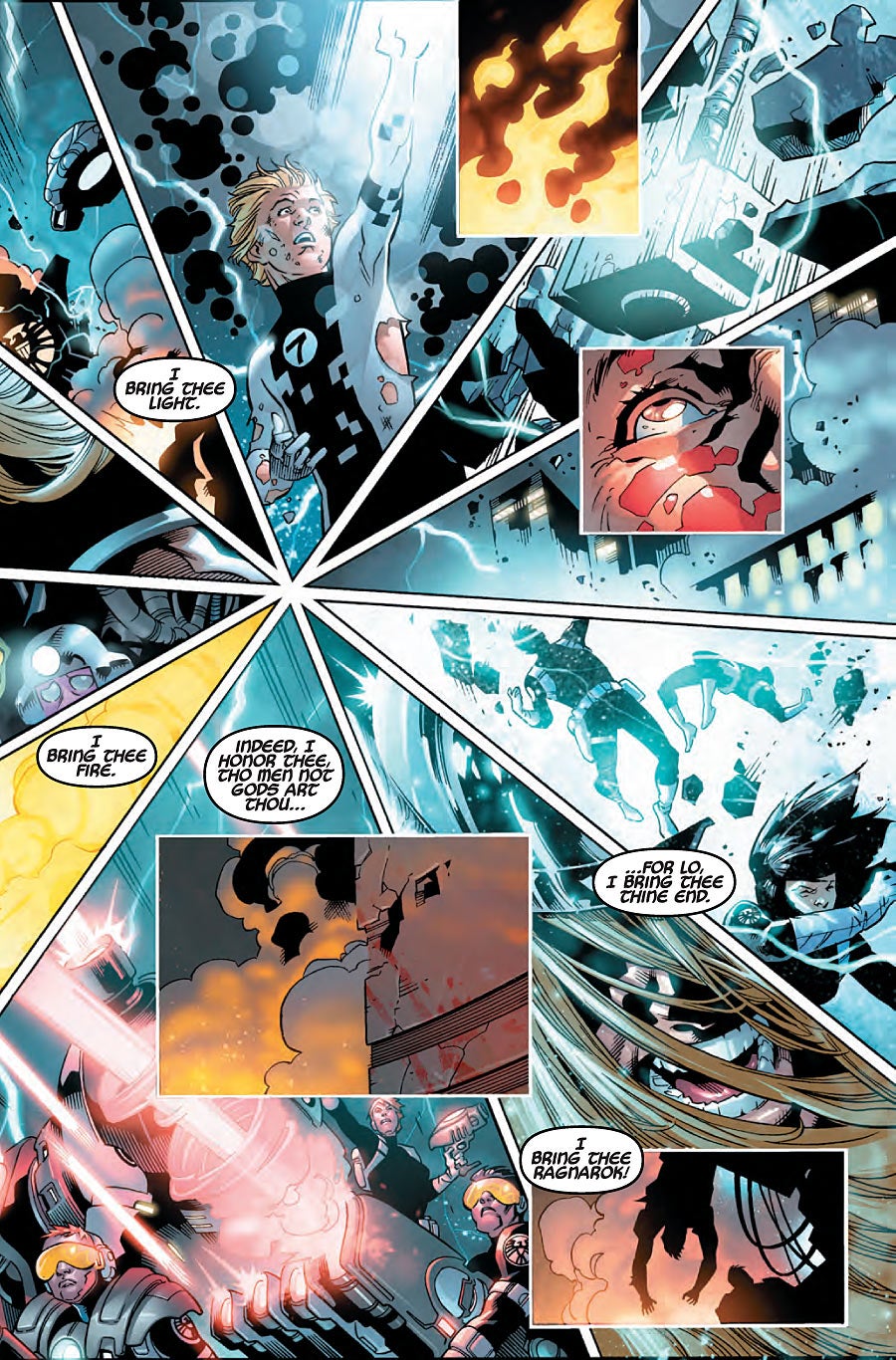 In this issue alone, the following characters make an appearance:

In this issue alone, the following elements of FF history are referenced or play a role: 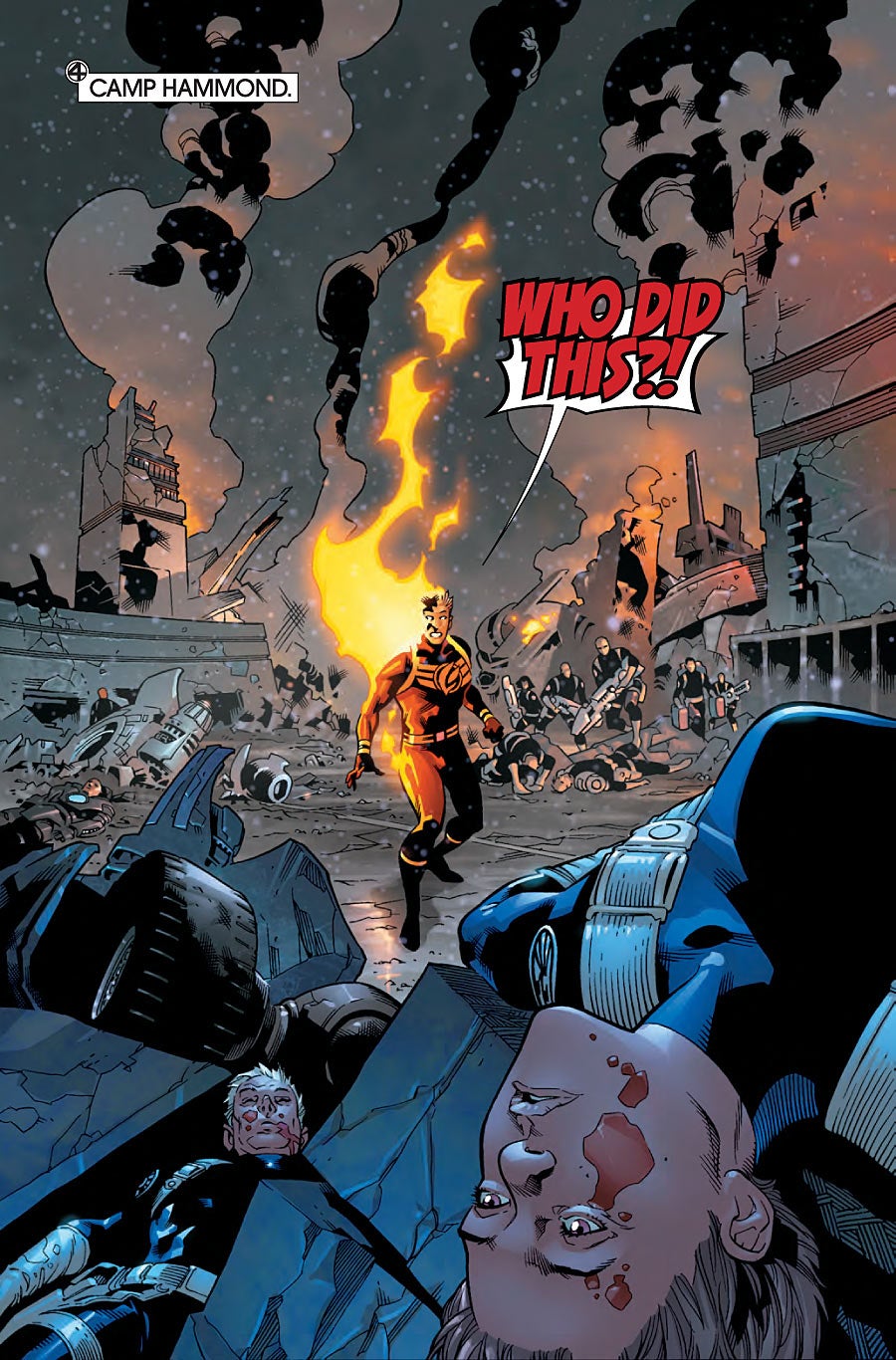 This issue even manages to make a reference another series and a more-or-less current storyline with an Editor's Note letting us know what issues to pick up to find out more. I'm honestly tempted to go and pick up James Robinson's All-New Invaders series just to reward him for managing to insert a legitimately intriguing reference to the series in a way that serves a real purpose here by reinforcing the interconnectedness of the Marvel U. I can't remember the last time that I saw an Editor's Note like that, especially one that wasn't pointing the reader to an "event" comic. Lately, is it just me or does it seem like "events" are the only things that carry over from series to series and connect them at all?

I really don't have much to say negatively about the writing of this issue. It bounces between subplots and locations beautifully without producing even a hint of whiplash and manages to advance just about every aspect of this fairly complex narrative without feeling rushed or cluttered. Robinson has also managed to nail the voice of each individual character and I'm particularly enjoying his Ben Grimm speech. While this and the last issue have revealed that the primary villains of this run have been the erstwhile heroes of the "Heroes Reborn" Franklinverse and their leader Cully, their ultimate plan has yet to be revealed and I'm honestly on the edge of my seat waiting to find out precisely what they're up to and how everything fits together.

If I had to say something tending toward the negative, I'd say that Bentley 23's characterization has always confused me and Robinson has taken it even further into WTF territory. This issue finds him pretty unambiguously standing with his father the Wingless Wizard while the people he professed to being his friends are held captive with one of them in a state which may qualify as torture. He entertainingly has always claimed to dream of achieving super villain status but I have personally taken this as more tongue-in-cheek than character-defining. I will always point to the scene in the Jonathan Hickman run on Fantastic Four when Bentley 23 kicked his father square in the groin and seemingly rejected an inevitable turn to villainy in his future as a much more obviously dramatic and defining moment for the character. Perhaps he isn't as onboard with the status quo in this issue as appears at first glance but his representation has always been so contradictory and seemingly scattershot that I'm not sure what to make of him. 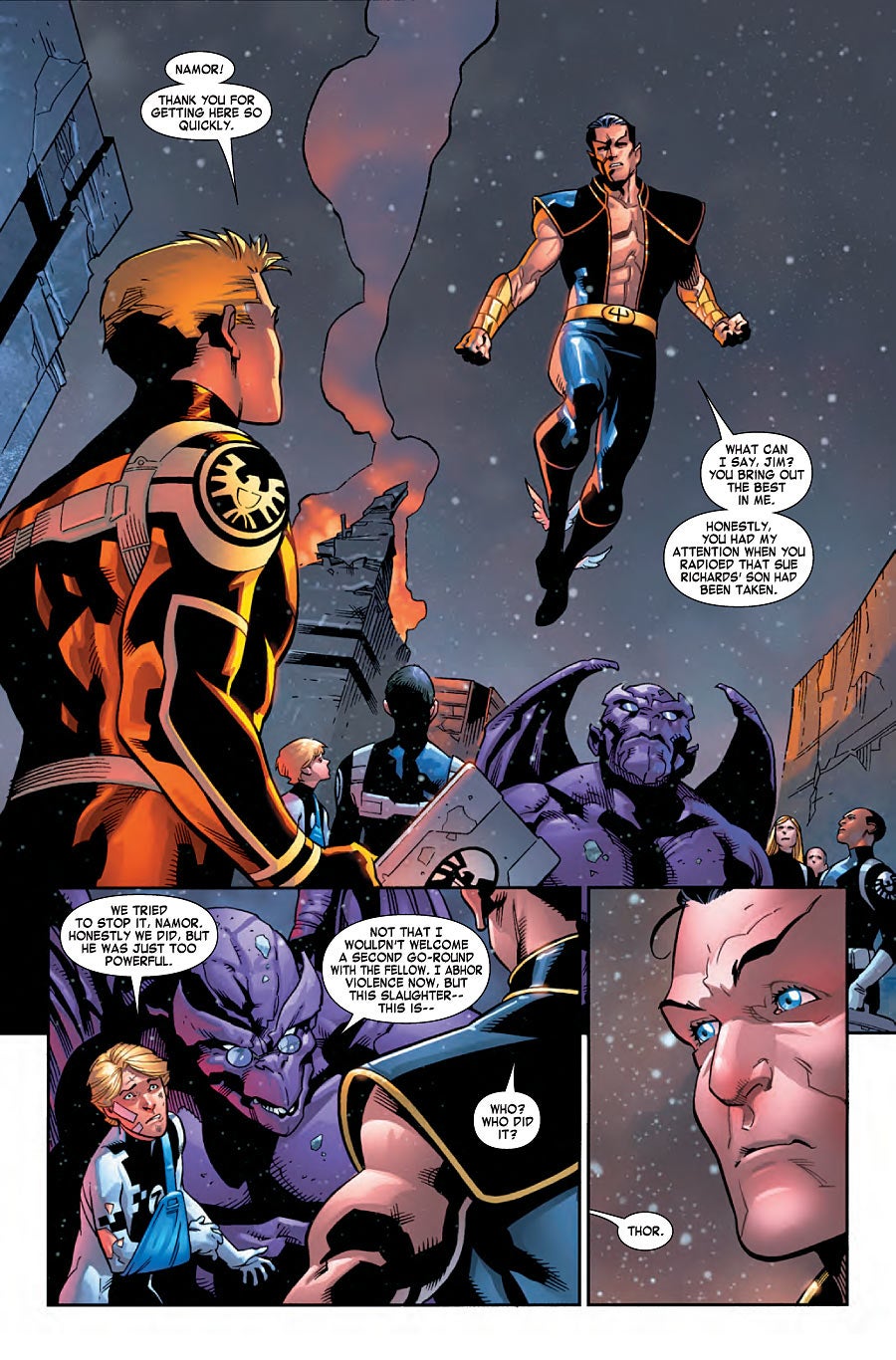 On the art side, this issue is just about flawless. Kirk, Kesel, and Aburtov come together to create a visually perfect package. Faces are polished and expressive, locations are nicely detailed, angles are nicely varied, and there is a good bit of fun to be had in the visuals. Kirk's panel layouts are varied and traditional enough to feel comic-book-y without being beholden to a strict grid arrangement. It's always hard to know where the pencils end and the inks begin so as I discuss some of my favorite moments, just know that I'm praising Kirk and Kesel. The opening two-page spread is pretty stunning, depicting an attack on the kids of the Future Foundation by the Franklinverse version of Thor. It beautifully conveys a frantic, disorienting attack by dividing the page into triangular slices radiating from a central point which only gives us strategic glimpses of mayhem and shocked reaction. The overlaid square panels showing the aftermath help to further obscure the action and emphasize the destruction. This is a pretty excellent page, my only complaint is that the art in some of square panels is copy/pasted from the next page which feels a bit like cheating.

Another moment I love is when Ant-Man is sabotaging the Rykers Island prison. It's always neat to have a round inset panel showing via implied magnification where a miniaturized character is and what he's up to. The comedy 3-D red arrow drawing attention to it is a fun little bonus. The first page of the prison break-out is intriguing as well as the page is divided into two equally-sized vertical slices, an arrangement that isn't often seen but works very well here for what is being depicted. Kirk and Kesel's melancholic depiction of Sharon Ventura is also noteworthy in how it tugs at one's heartstrings. Oddly, there is something particularly effective about the textless panel where she her face is downcast and the panel cuts off both the top of her head as well as her face just above her lips. It's hard to say why this works so well but it certainly does.

I really have to applaud Kirk and Kesel for nailing the Thing and his facial structure. There were times earlier in the series when I got the feeling that Kirk wasn't sure how Ben's features all fit together and he would sometimes fudge them from certain angles. Here though, he is executing his face flawlessly with great expressiveness. I'm also happy to finally get a smile out of the character and his sheepish grin as Sue kisses him on the forehead is priceless. I'm even warming up to the more implied brow structure, reminiscent of Byrne-era Benjy.

Oh, and did I mention that it's nice seeing the team back in the (slightly redesigned) blue costumes? Yeah, I should probably mention that. Kirk has done a really nice job taking the traditional blue outfits and giving them a slightly new spin. It isn't a radical reinvention but the blockier "4" symbol and boxier black sections certainly change things up a bit. It's particularly nice seeing Ben back in blue shorts since that look has been absent for what feels like years.

Colorist Jesus Aburtov deserves praise as well for his work here. Each individual scene is given its own unique lighting and coloration, helping to differentiate locations and moments in time. His work in the opening fight scene is noteworthy for all of the energy and lighting effects at play, the flash from Dragon-Man's flame breath brightening his face is very nicely done as are the flashes from Franklinverse Thor and the S.H.I.E.L.D. agents' weapons. I also quite enjoy his effective use of color in the confrontation with Sharon Ventura, helping to support the somber nature of the scene by playing up the shadows and creating greater contrast between the lights and the darks.

Overall, this issue is an excellent piece of an excellent run on what is a personal favorite series. As we near the climax, it seems almost necessary that with each issue building to a conclusion they become less satisfying individually than as part of a greater whole. Regardless, this is a run worth investing the time and money in getting into. It's had me clamoring for more since a few issues in and if continues as it's been going on, I think it will end up being a favorite run for me and for fans of the Fantastic Four. 'Nuff Said.