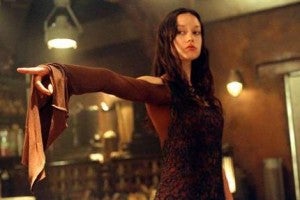 Joss Whedon regular Summer Glau, currently starring in the Syfy series Alphas which has a season finale coming up next week, told a reporter in an interview this week that she would like to appear in Whedon's upcoming TV series, Marvel's S.H.I.E.L.D.

The actress, who appeared on Angel, Firefly, Serenity and Dollhouse for Whedon, told IGN in an interview that ran today, "I have my fingers crossed behind my back. I try not to say anything to Joss about anything he’s doing because he has so many actors, and I know we all want to work for him. So I don't know, but if I could be a part of it in any way, of course, you know I want to."

It's true--there are a number of Whedon regulars who have not appeared in and are not yet scheduled to appear in any Marvel movies, and every time one of them gives an interview the questions suddenly become, "What do you think about Avengers 2? How about Ant-Man?". Some of his regular actors already have been cast in The Avengers, albeit in small roles. Alexis Denisof played Thanos's lackey, for instance, and Ashley Johnson, who was cut from Dollhouse and appeared in Much Ado About Nothing, appeared (although she had her role significantly diminished) in The Avengers as Beth the waitress.

Glau says that while she's delighted for Whedon's big-screen success, she's excited about seeing him return to TV with S.H.I.E.L.D.

"I’m just so proud that I got to work for him, and nobody deserves it more. I think he’s finally getting the place in mainstream filmmaking that we all knew could happen, and now everybody’s getting to enjoy it," said the actress. "And to get to see him back on TV, I just think that it’s going to be so gratifying for everybody who tried to get Firefly back on and supported Joss all these years, and bought the DVDs for friends and kept supporting it and kept promoting it. Now, I just cannot wait to see what he does next on TV. Of course, I’m excited about Avengers 2 as well, but it’ll also just be awesome to have Joss back on TV!"