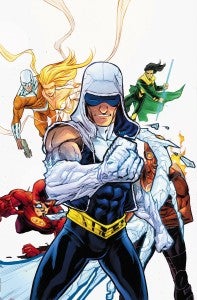 Captain Cold and the Rogues Gallery will take over The Flash, with a little help from their friends, DC Comics just revealed via solicitations released to Newsarama. The Flash will split into three villain-centric titles in September, with The Rogues publishing and Reverse-Flash and Gorilla Grodd taking the other two slots. In The Flash #23.1, Grodd takes over in a story by regular series co-writer Brian Buccellato and artist Chris Batista. The Flash's monthly creative team of Buccellato and Francis Manapul co-writing with Manapul on art will take on Reverse-Flash in #23.2, and The Rogues will populate #23.3, with Captain Cold appearing on the cover of Forever Evil #1 and apparently leading the charge in The Flash, suggesting he's a major player in the story. The Rogues story will be by Buccellato and former Shadowman aritst Patrick Zircher. The Rogues story seems to be putting The Flash's nemeses on a collision course with the villains at the center of the larger event: "The Rogues have their rules and their ways of doing business—so what do they think of the Secret Society's claims that the Justice League is dead, and that the world's villains need to unite? It's a culture clash that won't end quietly!" Meanwhile, Grodd deals mostly with the case of The Flash being missing in action, and the lack of direction that gives him. Reverse-Flash gets a New 52 origin story in his own book, which calls back to what they're doing with Zod, The Joker and other characters. It might be interesting to see whether those characters, not part of the Forever Evil charge on #1's covers, are being represented simply because they're significant DC characters or if they have a role to play down the line in the crossover. [gallery columns="2" ids="52055,52057"]