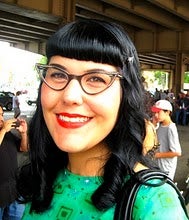 In her career as an illustrator, Stephanie Buscema has held on to one very key piece of advice that her grandfather, celebrated comic book artist John Buscema, once told her: "The most valuable thing he ever told me was to do the opposite of what everyone else was doing. Don't be a sheep, make your own path. Those words and him teaching me how to use a paint brush are probably the two things that helped form who I am." With that paint brush she has carved out her own place in the world of illustration, picture books, freelance work and comic books. Many will recognize Buscema's style of illustration from several contributions she did for Marvel's 2010 limited series Girl Comics, as well as her work in picture books. Her style hearkens back to an earlier era in comics and life in America, but with a fresh, crisp and playful sensibility. Buscema says that her style came from many different places and influences such as, "Art and illustration books, comics, old cartoons on VHS, monster movies, Golden books and picture books that had been passed down to us. As I got older I started putting the names of the artists next to the cartoons and books I was viewing-I started to look at at the work of Mary Blair, Charlie Harper, Eyvind Earle, Dan DeCarlo. As I dug deeper, I started to discover tons of fantastic art, and it was all made by hand. I knew then I had no choice but to learn how to paint. The rest just kind of fell into place!" Buscema's take on super heroes, and super heroines especially, has garnered her a popular following and her own reputation in the industry. Getting her start by doing inks for her grandfather John, she quickly developed her presence in the comics world, working for DC Comics and Marvel. Many may assume that having a famous last name makes things easier, but, "It was and is more difficult then most people would assume, for a lot of different reasons. Firstly, The last name doesn't mean a thing if I can't back it up with my own work. I was always very paranoid that people wouldn't give me feedback and be honest with me because I was John's Granddaughter. I knew I had to work harder and prove myself because of this and I was/am more then happy to." 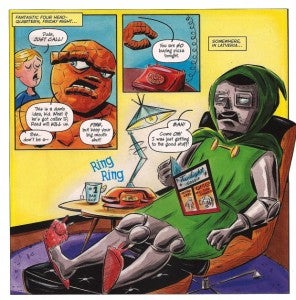 With her work, there's an emphasis on female super heroes, particularly an interest in 1960's Sue Richards of the Fantastic Four and the Inhuman, Crystal. For Buscema, the heroines of the Golden and Silver Ages of comics stand out for a reason, "Firstly, they looked like real women. They had class, stylish costumes (also, sometimes fabulous hair) and a certain appeal to them that I feel is rapidly getting lost today." She also admits to a love of Golden Age Wonder Woman and Catwoman, characters who still retain a strong female presence to this day. Based on her work and current projects, it's clear that Buscema has staked her own claim in comics, especially with a big launch this fall. 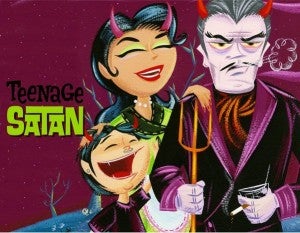 Along with Marsha and Candis Cooke, Buscema plans to release Teenage Satan, a "comic experience" that will expand past the confines of a typical web comic. Focusing on the adventures and mishaps of young Teenage (Luc) Satan in high school, Buscema describes the project as, "A cross platform app that's updated with content daily. It will include games, music, diary entries, etc. alongside the comic. We really want to get tweens back into reading comics, and with so many kids stuck in their phone and electronic devices, we felt this would be the perfect way to deliver the content to them. That will be out this September and we couldn't be more excited!" Early looks at the project are engaging, and the series promises lots of fun, great art and clever writing! Buscema's style and work have given her a career path that any freelance artist knows is a lot of work, toil and passion, and she has key advice for anyone seeking to make a living with their art, "You have to REALLY love it. I don't mean like pick up a pencil here and there, I mean you have to LOVE creating art enough to do it 7 days a week, 24 hours a day. Prepare yourself to never leave your drawing table/house. Get yourself on a schedule, wake up early, start your pages and work until you're done." With that work load, she adds, "It's not a job you can just walk away from at the end of the day, it consumes your life completely BUT in turn is the most rewarding and wonderful career path in the world." With her name and reputation firmly established in the worlds of illustration, comic books and more, Stephanie Buscema has certainly crafted a distinct and valued style. Be sure to look for her work, and check out her website, https://www.stephaniebuscema.com/ for more information about her work, her influences, and certainly Teenage Satan!

Star Wars: Original Obi-Wan Plans Were for a Movie Trilogy