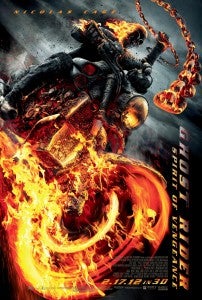 We’re less than a month away from ‘Ghost Rider: Spirit of Vengeance’ hitting theaters. The film is the first comic book movie of 2012, and we’re hoping it kicks the year off right. To get you pumped up, here is an extensive behind the scenes look of the movie, courtesy of Yahoo! Movies.

Gotta love the passion behind the film. Let’s hope that it translates to the screen. I know that everyone involved, especially Nic Cage, is pumped about this project.

A follow up to ‘Ghost Rider,’ the film stars Nicolas Cage as Johnny Blaze, former stuntrider turned demon. This time around, Blaze travels across Europe, battling the Devil and another baddie, Blackout. The film is directed by Mark Neveldine and Brian Taylor.

Ghost Rider: Spirit of Vengeance Behind The Scenes Video