Gerardo Preciado and Danny Bayliss, the creative team behind the wildly popular Batman: The Deal fan-comic from last year, are back at it again with a short Superman story. Titled God's end, it's the story of a centuries-old Superman coping with the end of the world in a uniquely Superman fashion. Preciado and Bayliss joined ComicBook.com to talk about their latest swing at a definitive, latter day superhero story. 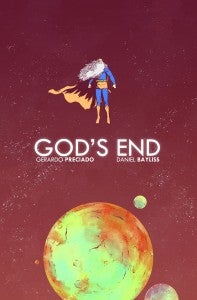 ComicBook.com: In your story, the narration espouses some philosophy that, broadly, would be considered as "liberal" in the United States. At moments, the "one world, one consciousness" narrative feels almost a bit socialist. Was that intentional? Gerardo Preciado: I really tried to see the world from the Superman/Alien perspective, I have not lost all my faith in mankind, but is it not the most natural thing that Superman's friends and loved ones will die one by one, and that he would disconnect from a world that has no real interest in making itself better? I'm not a socialist person, but being interested in the world's religions and myths, I just think that some sort of higher intelligence exists, maybe it's all just one giant mind, who knows, but what would not make sense would be for Superman to believe in an extraterrestrial God that came to Earth to save us 2,000 plus years ago, wait, never mind. ComicBook.com: When you're writing these kind of fan stories rather than a work of your own, do you ever stop to consider, "The guy doing this in the monthly comic would never get away with saying/doing this kind of thing"? Preciado: Not really, I guess that, in a way it just bothers me that superhero comics have no end, we tend to not want to think that we are going to die, so we act like we will live forever, live unhealthy, pollute our world. I am very aware for instance that it will come a time that Daniel and I would not do comics anymore, for any number of reasons, but even if we can continue, eventually one of us will die first, and that applies to everything, it is not sad at all to me, it just makes what you are doing now more special. I guess that that's why I gravitate to the end of Batman or Superman, I mean, dying gives living meaning, so to me, if Batman or Superman died they would mean even more. Daniel Bayliss: Appreciate your feelings about me dying, buddy. ComicBook.com: Is it intentional that Superman looks quite a bit like Alan Moore in these illustrations? Moore did, after all, famously write "the last Superman story" before the Byrne reboot took hold. Preciado: After all the Shia LaBeouf stuff that's been going around, and knowing how Alan Moore feels about superhero comics, I cannot confirm nor deny that we did that intentionally. However both Daniel and I are huge fans of his so it may or may not be completely coincidental. Bayliss: Well some people could say it looks like a depiction of Zeus or Jehovah or some ancient god too, or even the guy from Duck Dynasty. ComicBook.com: Who would you say inspired the space sequences, if anyone? The only mainstream artist I can sort of see doing stuff like this is Brandon Graham on Prophet. Bayliss: I love Prophet and the whole universe they created, but actually, I took a lot from sci-fi movies and it shows I'm pretty sure. Also I took a lot of inspiration on the works of Moebius and Georges Bess, I wish it shows, but I guess not so much. ComicBook.com: I love some of these creature designs. Do you see Superman as an inherently sci-fi character? Bayliss: Thanks, actually the first creature was inspired by the Flying Spaghetti Monster, so it could be a god meeting another god, sort of. About Superman being a sci-fi character, well it kind of falls into that category if you think about it, but guess It depends on who is writing it. ComicBook.com: In terms of the hero's characterization, did you draw on Kingdom Come for inspiration? That's the only other place I can think of where he got close to this disconnected from humanity. Preciado: I really love Kingdom Come but we didn't talk about it to be honest. But I'm sure it was somewhere in the back of our minds. ComicBook.com: Was the exploding Earth at the end intentionally meant to be a kind of twisted mirror image of the destruction of Krypton? Preciado: Yes, I thought that it would be interesting since we've seen Krypton explode a million times, that this time Superman would be the one destroying it and bringing balance to the universe. Maybe Krypton dying gave balance to the universe too. Bayliss: If you take a good look on that panel you can see a little space ship escaping the explosion. Actually not, we toyed with that idea, but we said Nah! that would be too over the top.