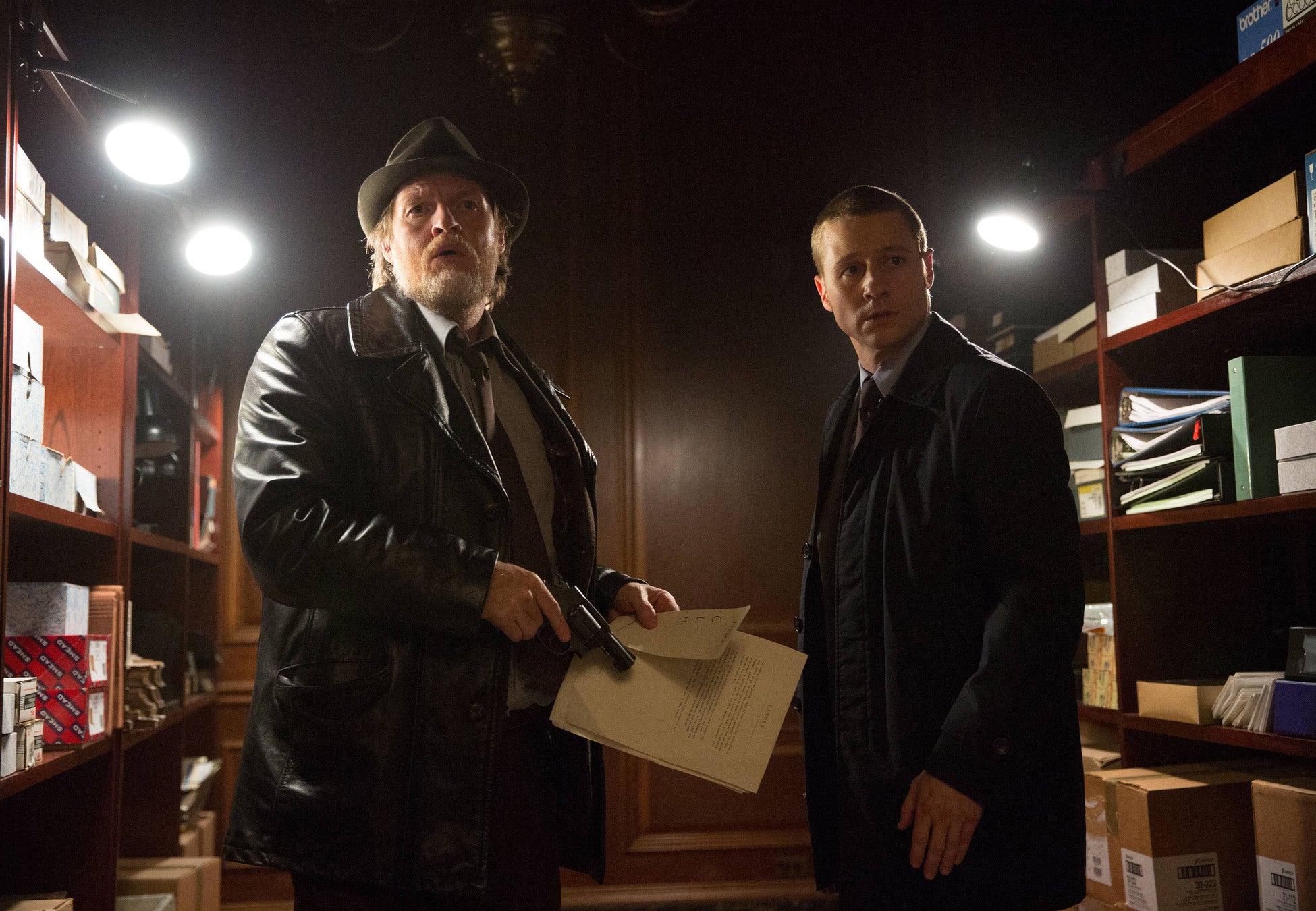 The episode opens as Cobblepot enters Barbara's apartment, introducing himself as "Peter Cumboldt."

Jim offers to walk him out, telling Barbara he's a work friend. Outside, he slams Cobblepot against a wall, telling him that if Falcone finds out he's alive, he'll kill them both. He says he should do it now.

Cobblepot says he won't -- that he needs his help because Gordon is the last good man in Gotham. He tells Gordon that unlike everyone else, he'll never lie to Gordon. He says to kill him now, or trust him. He repeats his "there's a war coming" warning, and says he can help him save Gotham -- that nobody looks for a dead man.

Gordon asks him what war he's talking about, and Cobblepot says it's all about money -- about Arkham. A group of revelers scream in the street behind Jim, distracting him, and Cobblepot scrambles away.

Elsewhere, two men are accosted by a stranger; apparently one of the men is a councilman and the man who stopped them is a constituent. He says he wants to show them something, and assembles what looks like a metal pipe. He tells oneo f the men to look through it, and when he does, it propels a blade into his eye. When the councilman starts to panic, the constituent says "You're next," and uses it to stab the man, who runs off, hiding inside a glass vestibule at a bank; the man follows him, saying that he really did vote for him, and kills him.

The next morning, Essen assigns the case to Bullock and Gordon, saying that the two were both found in a parking structure and that their wallets and jewelry were missing. Gordon thinks it could be political, but Essen and Bullock have their doubts.

Bullock tells him he knows where to start.

At the nightclub, Fish Mooney is auditioning singers; there's a pretty girl singing on stage, but she's not quite good enough for Fish. Fish asks her if she likes boys or girls; the singer says boys. Fish says to pretend she's a boy and seduce her, but the singer doesn't do that to Fish's satisfaction, either. After the girl leaves, Fish tells Butcher she's not looking for a girl, but a weapon.

Gordon and Bullock are shaking down someone named Nicky, who Bullock is convinced did it because this is his M.O. Gordon leaves, saying it's not their guy. Back at his desk, he finds something that Alvarez identifies as evidence from teh crime scene, including a development plan for the Arkham District of Gotham.

Thomas and Martha Wayne had written the development plan, says the mayor. They'll tear down the asylum and build a state-of-the-art mental health facility. The other option is to get rid of the asylum altogether and use the surrounding land as a waste-disposal site.

At the restaurant where Penguin is working, Maroni arrives and says that a lucrative deal is coming his way. He says that land is where the big money is.

Gordon goes to Wayne Manor, where Alfred tells him that the Wayne plan has been gutted by Falcone. Jim figures out that the councilman in Falcone's pocket was killed by agents of Maroni.

Bruce wants to make sure his mother's plan is implemented to help the inmates of Arkham, and Jim says that he has to work to stop a potential gang war.

Councilman Zoeller has been abducted, Jim learns via a call from Harvey. He's one of Maroni's guys.

Cut to the asylum, where the man who killed Councilman Jenkins is wheeling a barrel down the street. Inside is Zoeller; the man dumps gasoline to him and sets him on fire, saying that his customer wanted him to send a message.

The next morning outside Gotham, Jim and Harvey discuss what he's learned about the case; Harvey asks him how he knows so much all of a sudden, when Jim motions to Nygma, who has arrived to say that all three victims had puncture wounds from an unidentified spike -- an unlikely coincidence. They all figure out that it's the same killer; Jim says the idea of somebody working for both is nuts, and Bullock says only in Gotham. They leave to see a friend of Bullock's.

At the restaurant, Cobblepot is looking out at Maroni's men when his boss catches him and yells at him.

Jim and Bullock arrive at a prison, where they meet a man with a beard and give him two cartons of cigarettes to help them find a hitman who works for himself. The man says the killer's name is Gladwell - that he works out of the Molanski Building in Midtown.

As they're searching the building, Bullock tells Gordon that he thinks he's hiding something. A receptionist tells them where to find Gladwell, and his coworker says that they just missed him. Gladwell assembles his weapon as Gordon walks by, then comes around a corner with his gun drawn but doesn't see Gladwell standing silently behind a shelf and Bullock calls him back to see something.

There were news clippings about the Councilmen in Gladwell's desk. They head back toward where Gordon had been and find papers that say "CLM."

Bruce wakes up from a nightmare where he's seeing his parents' murder, and Alfred comes to check on him, jokingly asking if he was in the bad dream. Bruce asks to see his parents' Arkham files, saying that he's looking for a connection between the Councilmen's murders and those of his parents.

A group of gunmen make their way into the restaurant where Cobblepot is working, shooting a few people and stealing Maroni's money.  A group of Maroni's men charge in with guns blazing and find Cobblepot hiding in a freezer with a bag of money, saying that he'd managed to save just the one.

At Barbara's apartment, she's worried about Jim when he comes home. She asks if he's really "just doing his job," saying that she thinks he has secrets. He tells her that, yes, he does -- that it's part of his job. She asks him who Cobblepot is, and he asks how she knows that name. He tells her that he can't even begin to answer that name, and she asks if she can't or won't. He realizes it was Montoya who told her, and asks what is between them; Barbara admits they had a relationship for a year, and Barbara had broken up with her and moved on. Jim asks whether Montoya did, and Barbara says she doesn't know or care because she loves Jim. Jim is angry that she didn't tell him this the first time Montoya showed up.

Maroni is at the restaurant, furious and wanting to hit Maroni's "mouth." They motion for Cobblepot, and Maroni tells him that what he did, did not go unnoticed. He asks how long Oswald had been washing dishes, and says that he's now the restaurant manager (Lou was one of the men killed). He tells Maroni that he won't let him down.

At the police station, Bullock has tracked down the real Gladwell, who was killed by the hitman five years ago and had his identity stolen. Jim is convinced that if they can find the killer, they can prevent a gang war when the Arkham vote happens. Harvey leaves, and Jim tells him "tell her I say hi."

At Mooney's, she likes the latest singer a lot more. Her name is Liza, and she likes boys, too, but Fish offers her the job anyway, asking her if she wants to be a woman with power, money and respect. She tells her to seduce her, and the girl chuckles at her; Mooney is upset by that, so the girl comes to her and has more success than the previous singer, kissing her and then taking her drink and wandering away.

Bullock enters, asking for help finding the killer. He says he'll owe her. She says she'll try, but that it won't matter since Falcone will just replace him. She says she's not worried about Falcone losing, since she always has a plan B.

Gordon gets a call from Cobblepot, tipping him off that a Maroni-ordered hit will go down tonight, and realizes that it's likely one of the police officers providing protective custody who will do it. He sees that "CLM" is "Campos, Lazenby and Martins," who are protecting the mayor.

Gordon heads to the mayor's mansion, where he's met at the door by the mayor and tels him he needs to get him out of there, that the cops aren't in their cars. The mayor says he needs something from hsi safe, and when they head inside, the killer waits on the sidewalk for the pair. The mayor tells Jim to take him to his sister's house across town, and the pair are attacked as they start out the door. Gordon drops his gun along the way and the killer picks it up, using it to shoot through locks and follow the pair. The two end up fighting as the mayor looks on, with Gordon nearly being stabbed before Bullock shows up. The man briefly starts to act like he'll cooperate, but then makes a move for the mayor and Bullock shoots him.

Back at the police station, Barbara apologizes for not telling him about Montoya. She says that she doesn't want any secrets between them, once again asking about Cobblepot. He asks her to drop it, saying that it's work. He tells her that the last time he told her about his work, it was a mistake because she called the papers. She tells him she isn't going to live like this, and that he'll have to make a choice to let her in or let her go. When he hesitates, she scoffs and leaves.

That night, Fish pits the two singers against one another on a dock, asking them to fight for the job she's got open. The second girl, first surprised and seemingly annoyed at the request, quickly wins and asks when she starts.

Cobblepot arrives at an empty apartment holding a box; inside are the shooters who attacked the restaurant. They're reveling in their victory. Cobblepot offers them a box of cannoli, saying they deserve it.

At the police station, Gordon is watching Mayor James, who announces that there has been a compromise that will see the asylum retrofitted and reopened, low-cost housing created and also waste disposal. Fish is reveling in the damage this will do to Falcone, and Bruce is upset at how it went down. Jim explains that the mayor gave Maroni the disposal site and Arkham, and gave Falcone the housing project. Bruce says that he's upset everything his parents worked for is felling into the hands of criminals, but Gordon tells him that Bruce is still alive, so it's not too late, and it's worty trying to save the city.

At the empty apartment, the shooters have died from poisoning when Cobblepot leaves, taking the money with him.