In this era of the 24-hour news cycle, political pundits, talking heads, anchors, super smiley morning show hosts who drink lots of wine before noon (hi, Kathie Lee!) and so much more, it's nice to know that there ARE journalists and reporters out there who stand out, who can fight the good fight. Even in this heated election year, we still find pieces of the truth coming from our media.  Yes, they DO exist in the real world, but the comic book world certainly has its share of plucky journalists, investigative reporters and on the beat press.  Check out my list of the best of the best, the reporters who go the extra mile to report the truth to those around them, who seek to expose corruption, and those who try to keep freedom printing! These are the reporters who are solid as a whole, with maybe a couple of slips here and there, but hey, news can be ruthless! 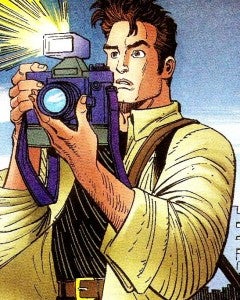 9. Peter Parker  Well, this one may be a bit obvious (as will my choice for number nine, but that in a minute) but it's true!  Peter may have been a bit of an insider when it came to getting the scoop on pictures of Spider-Man in his various acts of valor, but he deserves a spot on this list for that very reason.  Peter was a unique hero and a unique newspaper employee at his time, because he was actively trying to promote the truth about a hero despite numerous objections and protests from long-time editor J. Jonah Jameson.  Peter has always been an honest and upright reporter, and he has used his time with The Daily Bugle to advocate a better image of Spider-Man.  Even when he was working in other fields, before the events of "Brand New Day", he still held on to his integrity and heart, two things that served him well in his work in all aspects of his life.  8. Ben Urich  This Marvel universe character has been a part of some of the biggest events in the industry, playing an integral role as one of the media covering the events of not only Norman Osborne's siege of Asgard, but the Marvel Civil War as well.  He used his skills to figure out Daredevil's identity as Matt Murdock, but he used the hero as a help rather than as leverage.  Urich has also been key in exposing the criminal masterminds Green Goblin and most notably Kingpin, who put Urich through several bouts of physical and emotional torture in order to make him divulge Daredevil's identity.  Urich has been a trusted ally of the superheroes of Marvel for some time, and with fellow reporter Sally Floyd, he's been covering events for over thirty years now.  His tenacity and inability to break under pressure make him a valuable asset in the world of comic book reporters.  No matter if it's Secret Invasion, Shadowland, or World War Hulk, Urich will be on the scene and more than likely in the thick of the danger!

7. Jane Arden  Perhaps one of the biggest inspirations for other characters a little higher up on this list, Jane Arden was the star of her own long-running comic strip for over forty years, a record that not many other strips can say.  Starting all the way back in the late 1920s, Arden was quite a groundbreaking series for her day.  She sought to expose criminals, and by infiltrating and going undercover into their world, a very mold-breaking move for many in that era, especially for a female character.  While the character was never quite a hit in the United States, she had a good following worldwide, even covering World War II in some of her adventures.  The character would become a template for future female fictional reporters.  Many may look to Lois Lane and Brenda Starr as the true archetypes of the hard as nails girl reporter, but Jane Arden came before them all, even spawning radio programs and a film.  Many characters owe a debt to her, and not just for her bravery, but for the way she conducted business in those early comics.  Creators Monte Barrett and Frank Ellis are owed debts of gratitude. 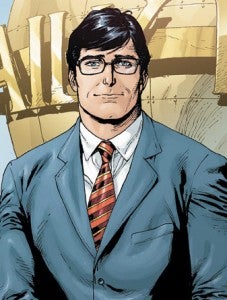 6. Clark Kent  Another perhaps obvious choice, but Clark IS one of the best in the business of reporting.  Another hero who uses the guise of journalist to do the work of a hero, Clark Kent was long thought to be "mild-mannered" when he started out, but over the years Clark Kent morphed into a pretty fine, upstanding journalist.  Even now in the new DC 52, Kent is noted as a champion of the people who puts the needs of the downtrodden and the disadvantaged front and center, despite some of the bellyaching from the higher ups with The Daily Planet.  There's been a lot of debate over the years as to which "identity" Superman is more of, Clark or Superman himself.  Could that be irrelevant?  Clark Kent as a reporter embodies many of the great qualities of Superman: an ability to save others, fighting for the truth and what's right, and a great sense of timing! While many see him as a lesser reporter than others at The Daily Planet, he can hold his own with any journalist, and his integrity is never in question.  He's not as brash as editor Perry White or as completely wholesome as Jimmy Olsen may seem, but he gets the job done and gets the public aware of the real evils in the world. 5. Tintin Perhaps one of the more well-rounded, and that's putting it mildly considering his array of skills, reporters on this list, Tintin is a bit of an oddity for some people.  Many find the young reporter bland, some find him compelling.While his stories typically started the same way, with Tintin being sent to report on some international topic but having a crazy adventure, many treasure his works.  His dogged determination are endearing to many, and they are also key elements of a reporter after a good story.  While Tintin's curious nature got him into trouble more often than not, his adventures were the gateway for many readers into parts of the world they could only imagine otherwise.  The character's issues came under some fire for sometimes racist overtones, but by and large people regard Tintin as a fascinating character, especially considering his young age at the time that most of his adventures around the world took place. 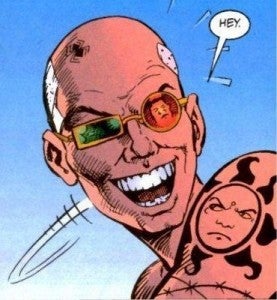 4.  Spider Jerusalem  Warren Ellis and Darick Robertson introduced one of the more intriguing and revolutionary figures on this list with the creation of Spider Jerusalem, the protagonist of their series Transmetropolitan.  Considered by many a classic example of the Hunter S. Thompson inspired gonzo journalist, Jerusalem used his war-hardened experiences to guide his work in The City as a journalist.  One of Spider's main foci in the series was his attempts to tear down political corruption and manipulation when he saw it, be it in the two-term president known as The Beast, or more famously The Smiler.  Spider's attempt to bring down The Smiler and his smarmy, power-hungry ways drove a lot of the action of the series towards the latter part of its run, and in the end it paid off.  There are certainly clear parallels to Richard Nixon in many ways in this book, and there has never been a shortage of political controversy, real or imagined.  What makes Spider Jerusalem deserving of a spot on this list though, is the way in which he went about going after that corruption, in the most visceral, foul-mouthed way possible, really shoving people's faces into the corruption to make them see it for what it was. 3. Vicki Vale Very few people have been able to connect the dots and figure out just who exactly Batman really is, but Vicki Vale is one of those people.  The character has had a strange history in terms of appearances.  She was an often-used character through much of the Golden Age stories of Batman, but she was absent for the Silver Age, making only a handful of Bronze Age appearances before coming back full force in the late 1980s (with Kim Basinger's role in the 1989 Batman movie largely to thank for that).  Vale lands on this list due to her tenacity and her intellect.  In the pre-new 52 universe, Vale connected the dots and finally cracked the secret of Batman/Bruce Wayne.  She even figured out the secret identities of Nightwing and Batgirl Barbara Gordon!  Over the years though, she's faced down the likes of Catwoman herself, saved herself from Ra's al Ghul, and has stood her ground even when being told she was dead wrong about something when indeed she was not. She was also a key reporter in the events of "Battle for the Cowl."  Vicki Vale is definitely not a reporter to underestimate! 2.Robbie Robertson  Speaking of reporters and good guys at The Daily Bugle, editor Robbie Robertson was often the good-hearted foil to Jameson's smear campaign against Spider-Man.  Countless defending of not only Spidey but Peter Parker seemed to be a daily thing for Robertson.  We eventually find out that the savvy editor had deduced Spider-Man's identity some time ago and was protecting Peter and Spider-Man all along.  Even after Jameson had his limit and fired Robertson, Jameson later rehired him and even went so far as to tell Robertson that he admired him!  Not every reporter out there can say such a thing!  Robertson also belongs on this list for his early defense of mutants and his calls for tolerance for all.  He even overcame past events in his life with the villain Tombstone to end up being a key part of trying to bring the criminal to justice, despite the great physical harm and personal trials it gave him.  His nerve and will eventually proved to be his greatest assets, and that's why he lands here on this list.

1.  Lois Lane  Perhaps the number one reporter on my list, Lois Lane is the quintessential journalist.  Perhaps known to most as Superman's love interest over the years, Lois has blazed her own path over the years as a reporter, and a guns-blazing, take no prisoners kind at that.  Lois has been around as long as there has been a Superman, making her first appearance in Action Comics #1 alongside the iconic figure.  Lois has been a driven, hard-nosed reporter since The Daily Star, later named The Daily Planet, came into existence.  Lois was one of the first to try and crack Clark's identity as Superman, almost succeeding on several occasions.  Most identify with the modern Lois, the one that harkens back to her earlier days, as a journalist dedicated to getting the story, and not taking no for an answer.  Lois has exposed corruption at the city level and recently on a national level with an expose on certain military activities.  The new 52 sees her heading quite a large media arm of The Daily Planet, and judging by the first few issues of Superman, she will continue to be a journalistic force to be reckoned with!  Very few can hold a candle to Lois, and her appearance in various incarnations of Superman and his adventures is a testament to her presence and foothold in pop culture, not to mention her abilities!

Great Comic Book Journalists: Who's the Best of the Best?