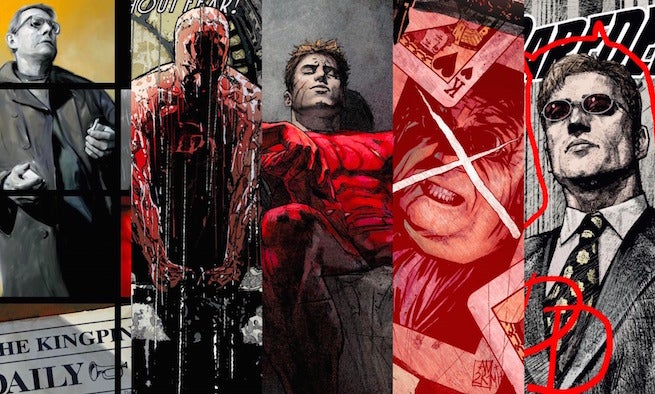 Brian Michael Bendis and Alex Maleev's 50-plus issue stint on Daredevil in the early/mid 2000s stands as one of the modern eras most influential creative runs. And while Daredevil's new series on Netflix mined a fair bit of content from Frank Miller's critically acclaimed work, viewers can also find Bendis and Maleev's fingerprints all over the show, from its incorporation of Claire Temple (Night Nurse), to it's uncomfortably brutal, bloody-knuckled aesthetic.

Here are 10 great moments from Bendis and Maleev that not only defined Daredevil for a generation, but also Marvel's entire "street level" universe, imbuing a darker, more realistic tone still found in many series to this day. 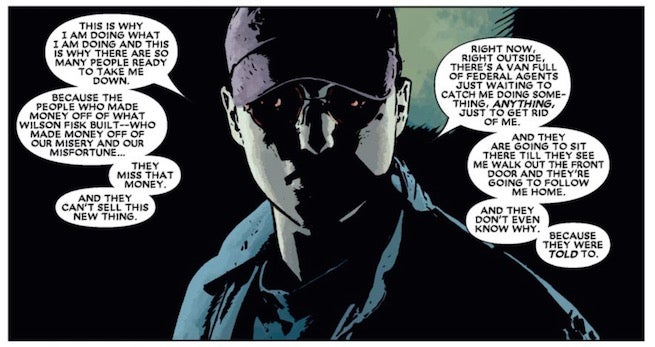 Bendis and Maleev seemed to almost take glee in Matt Murdock's misery during their run, so it was nice to get a reminder as to why this tragic character would continue to defend Hell's Kitchen in a red devil suit. In the penultimate arc "Decalogue," Matt secretly attends a support group to hear from ordinary people how Daredevil's existence has affected their lives. When Matt reveals himself to the group, he gives an emotionally-charged speech about his desire to build something new and good from the rubble that Wilson Fisk's reign of terror left behind. Like the character giving it, the speech is complex and nuanced — filled with both optimism and despair. 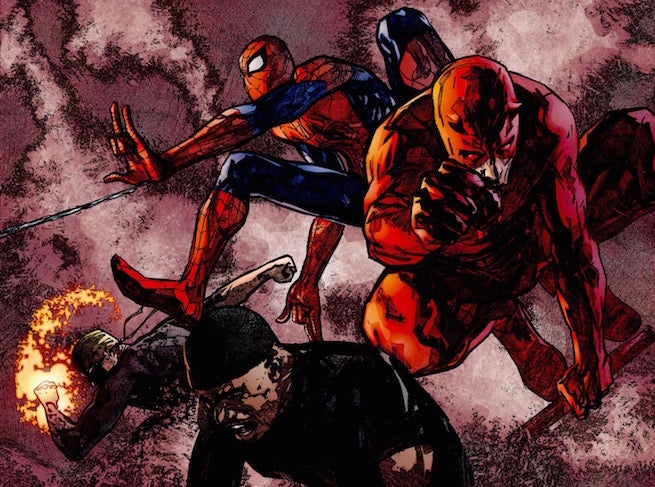 Who doesn't love a great superhero team-up, especially one born out of brotherhood? Following Daredevil's declaration as the new "Kingpin" of Hell's Kitchen, his fellow street brawlers, Luke Cage, Spider-Man and Iron Fist, tell their old friend that he's gone too far and that they will no longer stand by him. But Bendis and Maleev demonstrate their sense of good-timing and spirited, old-school superheroics when the band of buddies reassemble in the nick time, uniting beside Daredevil to help the Man Without Fear strike down a Yakuza street gang. 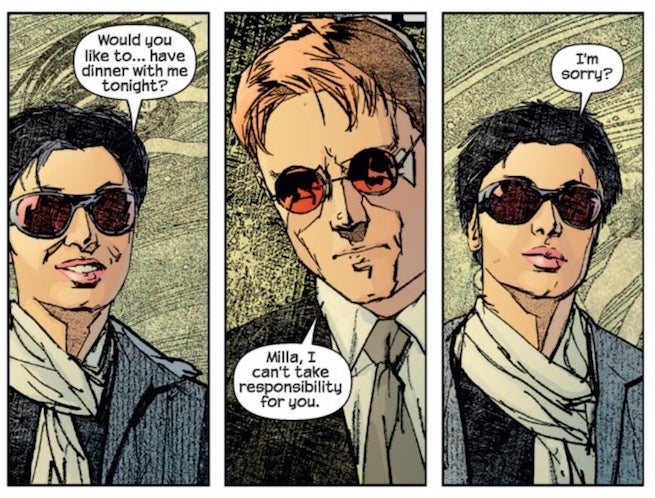 "Do you eat food" may not be the most elegant pick-up line in the tool box, but it proves to be an effective one when Milla Donovan formerly introduces herself to Matt Murdock. Like Matt, Donovan is blind, and instantly recognizes the sound, shape and smell of the man who rescued her, even after her beau-to-be denies any connection between himself and Daredevil. In a bit of foreshadowing, Matt initially attempts to rebuff the confident Milla by warning her that he "can't take responsibility" for her. Milla and Matt would later marry, but his words would come back to haunt the couple when she realizes that the spontaneous nature of their nuptials was spurred on by her new husband's emotional breakdown over the death of his first love, Karen Page 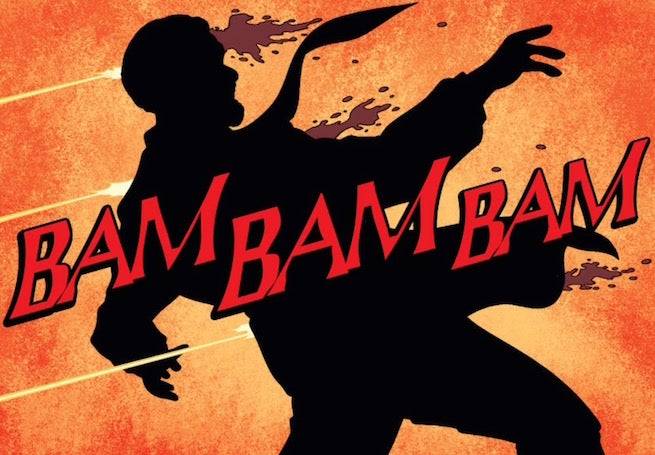 7. The Tragic End of White Tiger

The Bendis/Maleev run is not for sentimental folks seeking a heartwarming comic book story. Case in point: The tragic tale of Hector Ayala, aka, the amulet-powered hero, White Tiger. On the heels of having his secret identity outed in the press, Matt signs on to defend Ayala in court after he was framed for a murder. But Matt's outing has soured the public on costumed vigilantes, and Ayala is found guilty. Rather than face the music, Hector tries to escape the court room and is gunned down by police. Hector's death is so sad and despairing, it reads like a lost track from Bruce Springsteen's "Nebraska" album.

And it should be noted that Terry Dodson fills in admirably on pencils for Maleev for the "Trial of the Century" arc.

6. The Whacking of the Kingpin

The run starts with a bloody bang when a two-bit wiseguy named Samuel Silke makes his move on the Kingpin, leaving the big man for dead in the very first Bendis/Maleev issue. But instead of modeling their tale off of other mob stories like The Godfather or Goodfellas, Bendis and Maleev allude to Shakespeare's utimate play of betrayal, Julius Caesar in how Silke turns Fisk's own men against him. Eh tu Sammy? 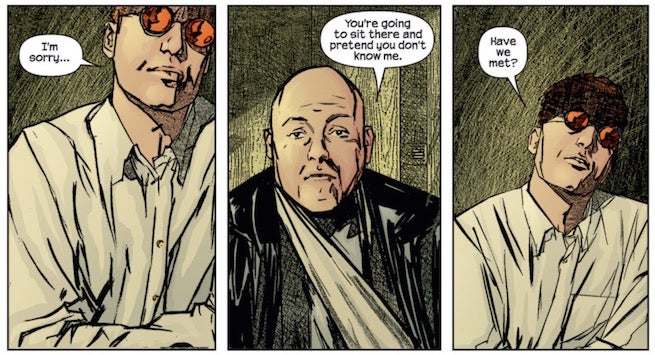 Longtime Daredevil rogue Stit-Man has always been a punchline, but Bendis'  droll wit makes this exchange between the two one of the funniest in their history. Following the outing of Matt's secret identity, Stilt-Man, aka, Wilbur Wood, arrives at Matt's law office out of costume. Wood's incredulous reaction to Matt's nonchalant denial — "Have we met?" — is the ultimate salt in the wound. It's a moment of well-timed levity considering the dark and tragic situations Matt frequently finds himself in during the bulk of Bendis and Maleev's run. 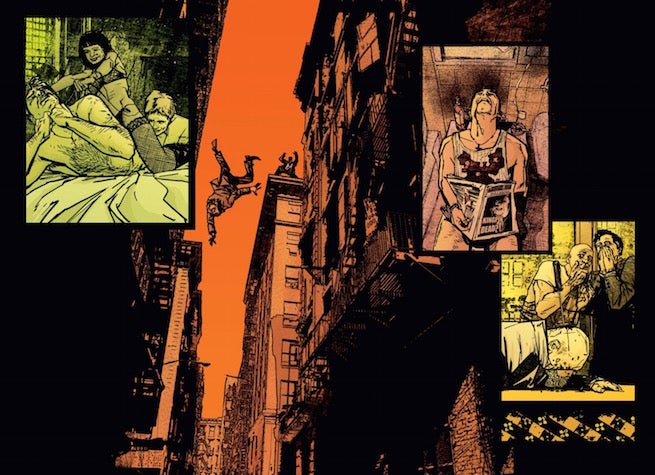 OK, so maybe "Underboss" borrows a few things from classic Mafioso flicks. When Fisk's wife, Vanessa, discovers that Sammy Silke and her own son, Richard, orchestrated a hit on the Kingpin's life, she exacts revenge in the most brutal way possible. She kills Richard herself, and then arranges for the remaining betrayers to be systematically whacked. If Ray Liotta was narrating the scene, we would have been told "there were bodies everywhere" while the piano outro to "Layla" played. 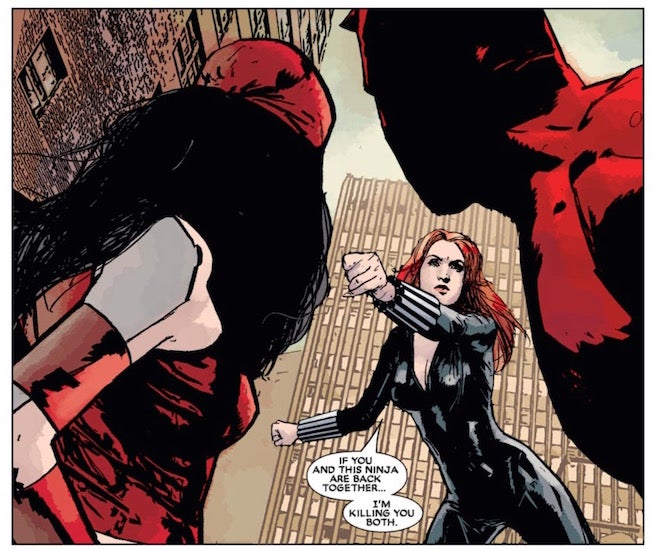 3. The Hunt for the Murdock Papers

In an arc that thematically echoes the very first Daredevil/Kingpin story from Frank Miller and Klaus Janson's glory days, "The Murdock Papers" teams Daredevil with former flames, Black Widow and Elektra, in a quest for alleged evidence that would confirm Matt as Daredevil. In the story, The Kingpin is offering up the "Murdock Papers" to the feds, and in exchange for complete exoneration.

If that plot-line sounds vaguely familiar it's because when Fisk was introduced to the Daredevil universe in the 1980s, a number of crime families were vying for some mythical "papers" that detailed the Kingpin's entire operation. The entirety of " The Murdock Papers" is a fitting capper to Bendis/Maleev's epic run, but the scene where Widow admonishes Matt for getting back together with Elektra (he didn't) is an extremely funny one. 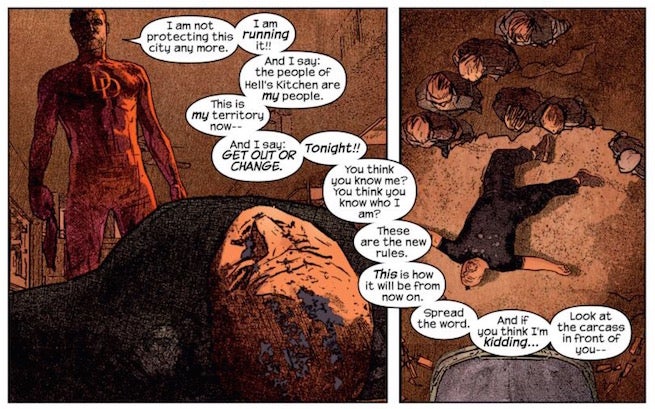 After years of playing a methodical cat and mouse game with his arch-nemesis, Daredevil shocks New York when he physically destroys the Kingpin and declares himself the "new Kingpin." He would later have to clarify his choice of words (see entry No. 10), but it's a stunning character reversal all the same. Daredevil had never been one to go so far with an adversary, nor has the Kingpin ever been a pushover in a fistfight. But between Matt's emotional frailty from the outing of his secret identity (more on that shortly) and Kingpin's weakened state from his attempted whacking (see entry No. 6), the stars were aligned in creating this moment. 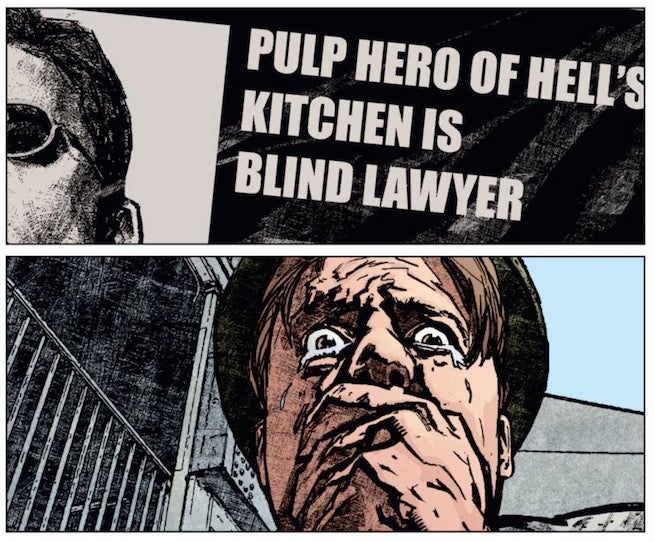 The moment that changed Daredevil comics forever. Thanks to one screaming headline courtesy of the Daily Globe, Matt's whole life is turned upside down. Nearly every remaining issue of the Bendis/Maleev run addresses how complicated Matt's life has become now that his secret identity as Daredevil has been outed. The creators deliver the moment perfectly through a tearful Foggy learning the painful truth about his partner and best friend alongside the rest of the world. It's a perfect way to add pathos to an already-shocking scene.