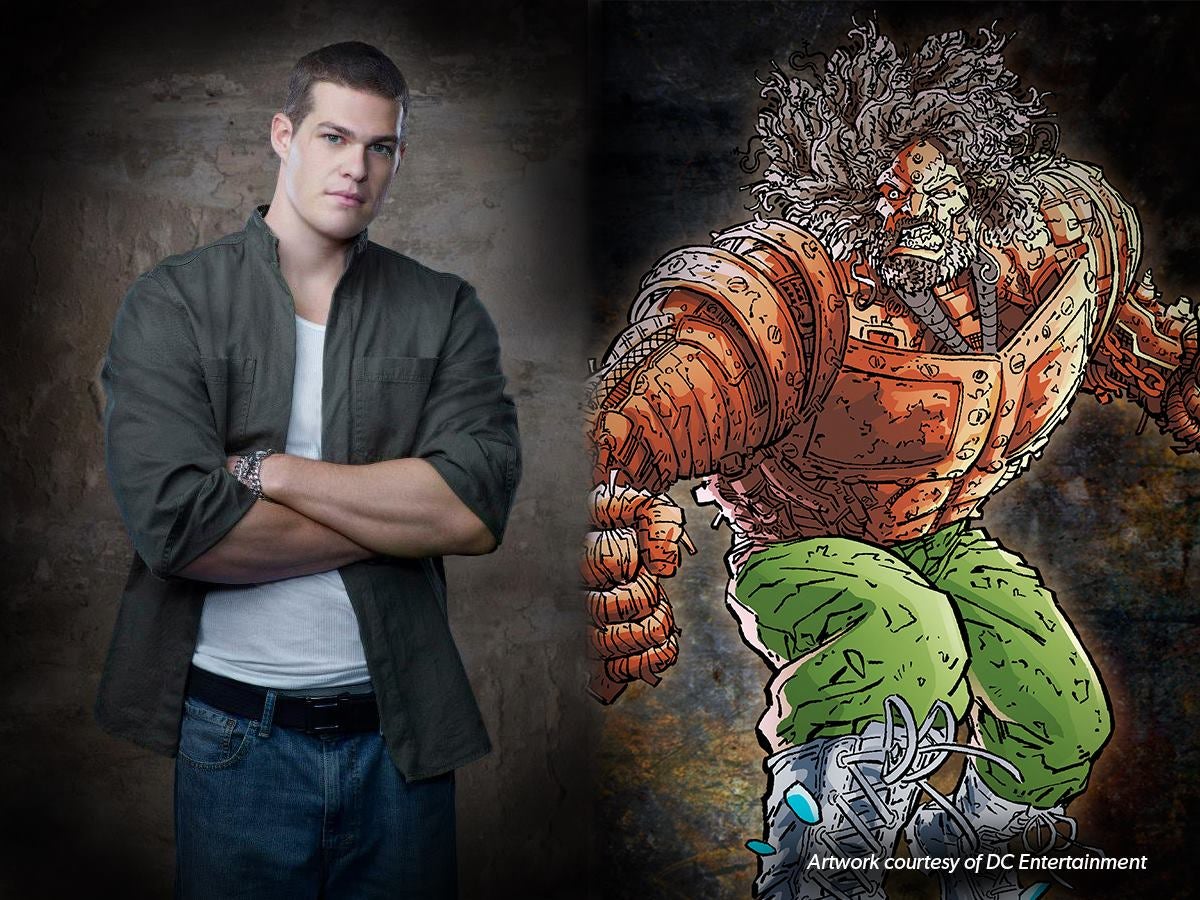 Tonight's episode of The Flash sees Barry (Grant Gustin) squaring off against Girder, played by guest star Greg Finley of Star-Crossed fame. The episode, titled "The Flash is Born," is widely expected to be the one where Barry finally reveals his chosen codename to Iris and, by extension, her blog's audience and the world.

To do it, though, he'll have to survive a fight with a guy made of living metal, who kind of looks and talks like the bullies in an '80s teen comedy. Yikes!

Finley (who's really a nice guy, we promise) joined ComicBook.com to discuss tonight's episode of The Flash, his favorite comic books growing up and tonight's "bad ass" episode of the season's hottest new superhero drama.

You're probably most recognizable from Star-Crossed. It seems like a lot of people from other CW shows are popping up on The Flash. Is that some semblance of job security?

I'm really glad they brought me back for something. Like all of us attached to Star-Crossed, I was devastated by the news. We had a blast down in New Orleans doing that show but to be back on a show like The Flash, I didn't know what to expect. The production was crazy; it was like shooting a movie. It's very good to be back on The CW. 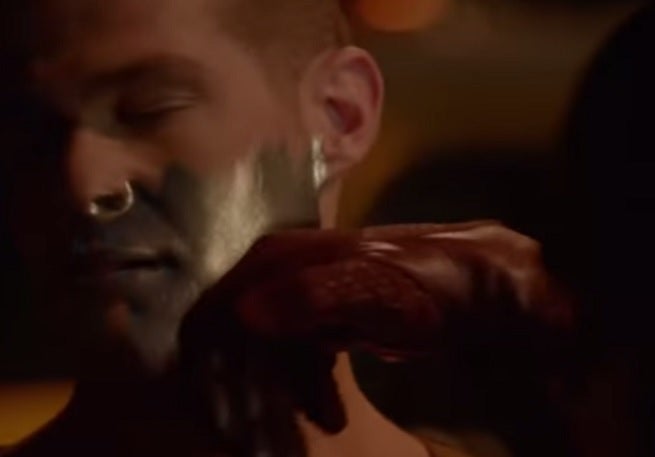 How did the fight choreography work for you? I imagine it was very challenging, even just standing there and trying to NOT react while being punched.

I basically had to take the punch but for some reason, the speed wasn't right and this and that and the other and I needed to force the other way when he punched me with my jaw -- kind of fight the punch a little bit to make it look more real. And on Barry's gloves, there's these little lightning bolts and they're like little rivets and they're rough, so it did hurt a little bit...but it was fun. This is the kind of stuff that you pretend as a kid, so it was cool.

You're getting to play a power set that hasn't really been developed very much on film. We've seen Colossus but he never got a ton of camera time.

Yeah, I know! Besides Wolverine, Colossus was probably my favorite character growing up. I loved Colossus, I was an X-Men guy and of course now I'm in the DC family and I'm love the DC comics as well. But Colossus was my favorite guy, and when I saw the final CGI of Girder, it looked a little like Colossus, which I thought was cool.

You see a lot more of Girder than you've seen of Colossus in those X-Men movies so I think it will be cool for fans to see what the transformation looks like on-camera. I was so pleased with how it came out when I first saw it in that preview; I was hyped. 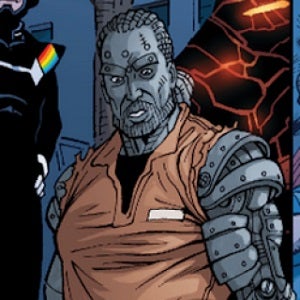 What did they give you to bone up on the character? Obviously in the New 52, he hasn't been around much.

Yeah. The writers told me a little bit about the backstory of Girder of course, and I honestly did my own research. I went to Google and just searched "Girder, Flash Comics" and saw pictures and the backstory of how Tony turned into Girder and I just read as much as I could to prepare for it. At the end of the day, he's just a nut who hates The Flash, you know?

Does it worry you at all when you see that in the New 52, you only lasted one issue and that it was Grodd -- who's already been on the show -- who killed you?

[Laughs] Well, I hope that they have their own take on it! I can say that I'm in more than one episode and there's always ways of coming back when you're a metahuman. Good old Dr. Wells could clone you, hopefully. Who knows? But of course you're worried.

One of the things that I thought was interesting about Drake on Star-Crossed is that he was an agry, aggressive guy, but you got where he was coming from, I think. Is that something you'll bring to Girder as well?

Some of my fans were asking me on social media, "Hey, are you going to be the bad boy with a heart like Drake was? We loved him so much." And I said I think Tony is just...a bad dude. There's always reasons why people are the way they are but I think at the end of the day, Girder is just a bad dude, although he has a little bit of a redemptive arc later on. I don't know if I can say that. Tony has a little bit of redemption in him later on, but not as much as Drake. Drake was a much better guy. 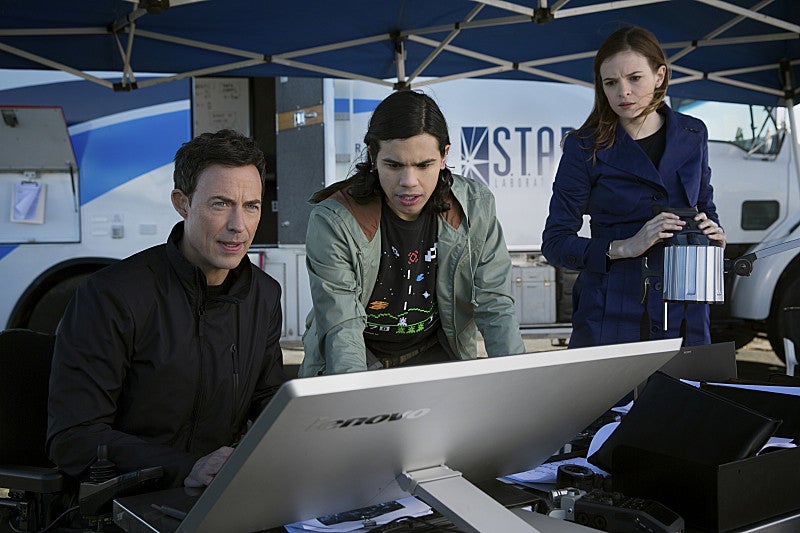 With Wells, you have this kind of mysterious factor. As an actor, do you try to read between the lines with a character like that or do you think it's better to be surprised along with your character?

Yeah, I definitely think it's better to be surprised. Tom [Cavanagh] does a great job with Dr. Wells. I was happy that I got to work with him in the second episode that I worked on. He's a sneaky guy, it's such a great character for him to play, and of course I read the scripts but I don't like to know too much. I definitely like to know just as much as your character becuase otherwise you might get stuck in your head, you know?

I've talked about that with actors from The Walking Dead, who do or don't read the comics because they want to know when their characters die. But I always think of that: does reading the comics help you to build in a direction or do you have to put that aside because God knows what they'll do on the show?

Exactly. It's cool to know your character and to know the character you're playing as much s possible as far as research but you have to have a happy medium because every show is going to depict the comic book a little bit differently and have their own kind of artistic freedoms with it. You know at the end of the day it's not going to go 100% by the comic book and you just hope that fans understand you're trying to stay as true as possible while doing your own thing, as well.

Who did you have the most fun bouncing off of? All we've seen you with in the ads is Candice and Grant.

I really loved the whole cast; they were great. Grant is the nicest, coolest kid. Everybody welcomed me, but he's the leader there. They were really warm and welcoming to me. Grant is killing this role; the wittiness, he's funny, he's serious and he's really doing a great job with Barry. He was fun to play with, and so was Candice.

There's been a lot of speculation that there is at least one really big moment coming up this week. Is it fun to come in for the first time on a really anticipated episode?

Yes! And when we were shooting it, you kind of knew it was going to be pretty cool. We worked hard on the episode. The stunts and those action scenes, we worked really late nights. Sometimes you just know when it's going to be pretty badass and I can assure you this episod eis going to be very badass, for sure.