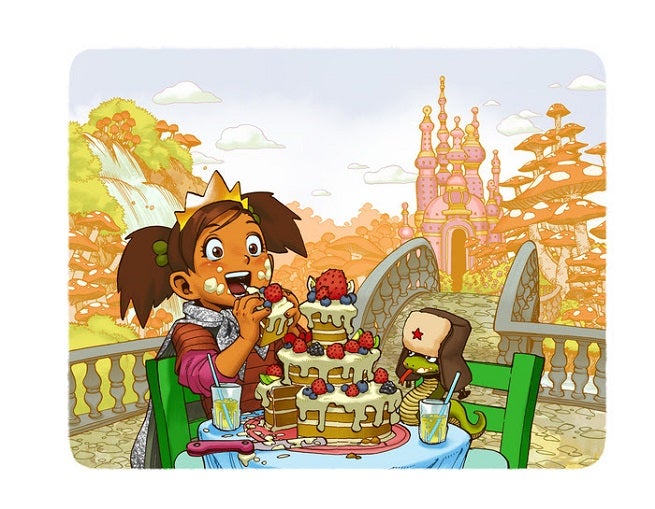 The Princess Who Saved Herself, an illustrated prose novella by comics writer Greg Pak that was funded as part of the Code Monkey Save World Kickstarter campaign last year, has been handed off to the colorist and will be available digitally soon, Pak revealed to Kickstarter backers today.

A children's book based on the Jonathan Coulton song of the same name, centers on a young princess who battles a dragon.

Here's what Pak had to say about the two-page spread -- apparently pages 2 and 3 of the book -- seen above:

Just a quick note to let you know that Tak has finished drawing and inking "The Princess Who Saved Herself" children's book! Jessica is hard at working coloring and we're hoping to have the finished digital version for you in the next two months or so.

Just to whet your appetite, here's one of the double-page splashes! I literally shouted "I love it!" when these colors come in.

The Code Monkey Save World Kickstarter campaign originally sought $39,000 to make a miniseries that mashed up a number of characters from Coulton songs, including the titular Code Monkey, a supervillain called Skullcrusher and a hero known as "The Skipper" who was an Olympic-level curler. It was a huge success, ultimately generating nearly $350,000. The Princess Who Saved Herself was conceived as a stretch goal that would be completed if the campaign beat $250,000.

Greg Pak Reveals First Look at The Princess Who Saved Herself