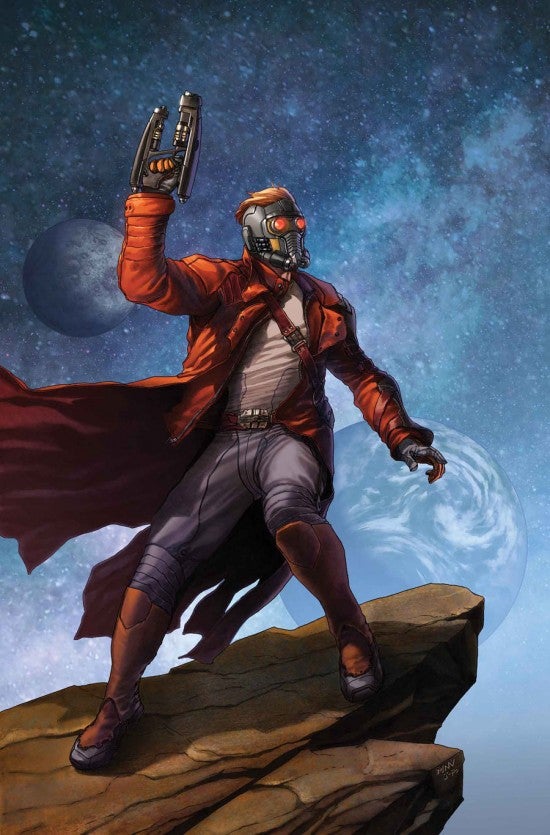 Today at Marvel Comics's The Next Big Thing panel at the Chicago Comics and Entertainment Expo (C2E2), the publisher confirmed reports that Star-Lord will get his own comic ahead of the release of Guardians of the Galaxy to theaters this summer. Titled Legendary Star-Lord, the book will be written by Sam Humphries with art by Paco Medina. "Sam has got a great story planned for it. It's epic. It's like a Western in outer space with humor and hijinx and the fate of the entire galaxy resting in his hands," Editor Mike Marts said. The cover to issue #1 will be by Steve McNiven with variants for the issue by Marvel's just-announced batch of new "Young Guns," a callback to a successful art program that has helped the publisher push young and underrated talent over the years. Those artists include Wolverine and the X-Men artist Mahmud Asrar, Guardians of the Galaxy artists Nick Bradshaw and Sara Pichelli, Miles Morales: Ultimate Spider-Man artist David Marquez, New Avengers artist Valerio Schiti and Wolverine artist Ryan Stegman, according to CBR, who broke the story this morning. The character, whose real name is Peter Quill and who is played in the upcoming, James Gunn-directed feature film by Parks and Recreation's Chris Pratt, is the second Guardians of the Galaxy member to get an All-New Marvel NOW! title recently, after Rocket Raccoon, whose series is being done by Skottie Young.

Guardians of the Galaxy's Star-Lord Gets His Own Comic Book