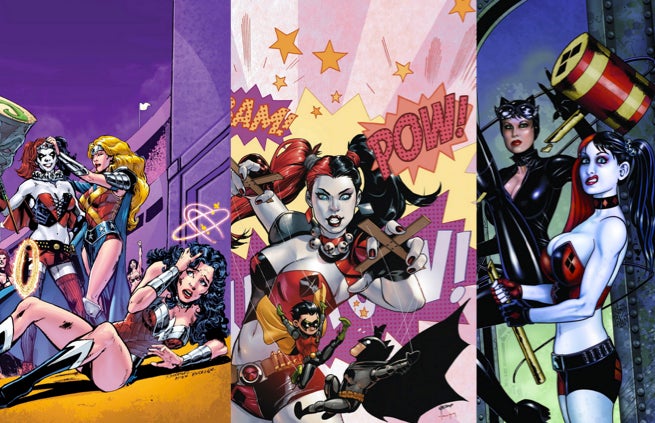 The DC Universe will feel the Mad Love in February, courtesy of Harley Quinn.

DC Comics announced today Harley Quinn will headline their February 2015 variant theme. Harley will grace the variant covers to 22 of DC's titles throughout the month, bringing her typical screwball antics to the World's Greatest Superheroes. Below are the titles that will receive a Harley Quinn variant, and their artists.

The variant covers add to the surge of attention that Joker's former assistant is currently enjoying. Her ongoing series, by Jimmy Palmiotti, Amanda Conner and Chad Hardwin, has been a commercial success since its debut, consistently landing the Top 10 best-selling list. She's even conquering the world of film, with a role in DC's upcoming Suicide Squad that Wolf of Wall Street actress Margot Robbie is reportedly set to play.

Harley Quinn Month continues DC Comics' monthly variant themes, in which all of their variant covers showcase one particular concept or character for the month. Past themes have included Monster Variants (for October), Selfie Variants, and Batman Team-Up Variants. November's theme is LEGo variants, and December's will see Darwyn Cook provide "The New Frontier" style covers.

Check out some of the covers in the gallery below, which Comic Book Resources, Newsarama, IGN and ComicVine debuted earlier today.