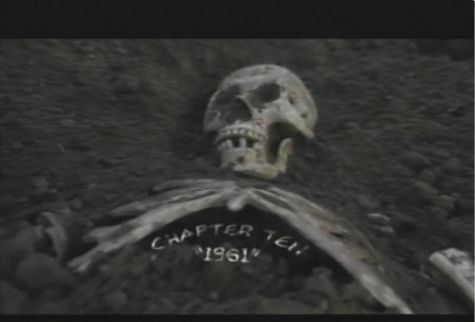 As much as I enjoy Heroes, I have to admit it was incredibly difficult to sit down to watch this week's episode, entitled "1961." Why? Two things troubled me from the end of last week's "Turn And Face The Strange" episode. One was Angela Petrelli's worse-than-General-Hospital acting: "You're gonna have to dig." WOW, just wow. Easily the single worst delivered line on television in years. Two, if Claire, Nathan, and Peter are just digging up bodies, why didn't Angela just point to the undisturbed ground and say, "There are a crapload of bodies beneath us?" Why force everyone to get all sweaty and dirty? Knowing that I'll never get an answer to why the director allowed reason one to make the final cut, I came back this week in search of a logical reason for number two. We pick up where we left off last week: digging away. Peter wonders why Angela is making them dig up the graves, that it isn't right. Peter walks over to Angela and wants to know what happened out there, and we get a flashback to February 1961. 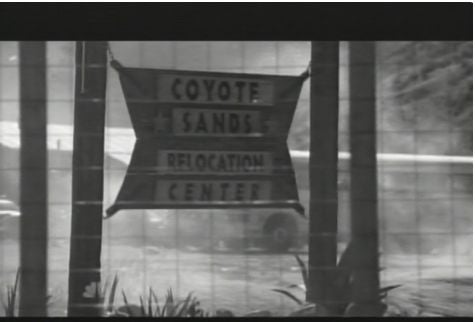 Chandra Suresh escorts a group of kids, including a single Angela. He's there to work with them. At the barracks, Angela meets three boys, including a young Charles Linderman. They're the welcoming party. After they leave, Angela talks with her younger sister, Alice. Angela explains that the entire family is there so Dr. Suresh can cure Angela of her nightmares. Back to the present: Angela tells Peter that her sister and parents all died at Coyote Sands. And that if the Petrelli family doesn't come together and settle their differences, history will repeat itself. Angela said that in 1961, the government found out about everyone with abilities and rounded them up and put them in Coyote Sands. Angela tells Peter, Nathan, and Claire that she's been having dreams about her sister, who appears to be alive. Because of this, she needs to find her sister's body so she can give Alice a proper burial. Angela said the Company was started there--the survivors vowed to keep the secret. That secret held for 50 years. Angela and HRG are trying to keep it that way, but Danko has proven to be a tough opponent. Angela says that if they can make it a secret again, they won't have to hide. That means killing people, erasing memories, whatever it takes. Peter, ever the moral compass, objects. He takes off, but Nathan follows and says, "I'll get him." 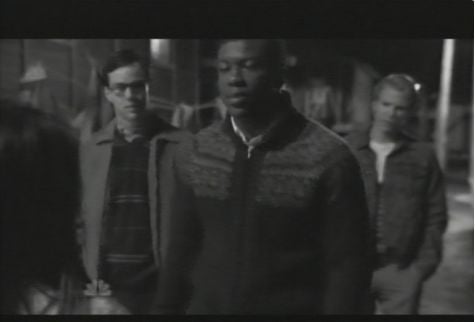 Another flashback: the three young men see Angela after she's had a nightmare. They let her know that everyone there is special. To prove it, Linderman heals an open cut on her leg. One of the kids thinks that they're lab rats, while another believes the scientists are there to help them become normal. They ask about Angela's nightmare, and one of the kids tells her to stop being afraid. That she needs to start believing. Angela tells them to not trust Dr. Suresh. Then she goes back into her barracks. Angela tucks Alice into bed. A cold Alice tells Angela that her feet are freezing, and Angela tells her that is what she gets for not bringing any socks (Alice didn't bring clothes on this trip-just toys). Angela tells Alice that she'll find her some socks. Could this be the source of Angela's sock 'fetish?' At that point, Alice lets loose a secret: she can control the weather. They look outside and it starts snowing. Alice is scared of Dr. Suresh. Back to the present: Claire and Angela are talking. Angela says she wasn't as strong as Claire when she was 16. If she had been, things might have turned out differently. Angela asks Claire if she's ever done something so awful that if she thought about it or talked about it, that she might never stop crying. And then BOOM--a windstorm. It's from Angela's dream. Angela says that it's Alice. She runs out into the storm and screams for her sister. This is getting pretty weird. At a diner, Peter and Nathan are chatting. Nathan says that he and Peter need to work through their problems. Peter zings Nathan back by telling him that Nathan should have stayed in Washington to solve a problem that he created. Peter calls Nathan selfish. Back at Coyote Sands, HRG stumbles through the windstorm. Out of nowhere, he gets hit and dragged into a building. It's Mohinder. HRG explains that he and the Petrellis are there because of a dream. Mohinder tells HRG that he's there to find out what happened 50 years ago with his father. Another flashback: Dr. Suresh pulls Angela into a lab. He runs some psychological tests. Angela tells him that she had a dream about this exact moment, but that her dreams are confusing. She tells him that he will kill everyone there--her parents and sister. Angela tells him that it will get out of control. Dr. Suresh says that she is wrong. That everything will be fine. Then he pulls out a large needle. Back to the present: Angela tells Claire that she tried to warn everyone. Angela believes that her sister is causing this storm and that she must go confront Alice--alone. Angela walks outside--and away--and the storm stops. HRG shows Mohinder the mass graves. Mohinder thinks the worst--that his father did indeed kill everyone. HRG insists that Dr. Suresh (who he met) was a good man and that Mohinder shouldn't make any assumptions. Nathan and Peter are back. Peter wants to track down Angela. Mohinder goes with him. Inside a building, Mohinder tells Peter that we're destined to become our parents. He's become his dad. Peter explains that Angela wants to start a new Company, and Mohinder thinks that it could be a good idea. That unlike the old Company, which was corrupt, this one could do some good. Meanwhile, HRG and Nathan are looking for Angela in another building. HRG asks if Nathan and Peter are going to be okay, and Nathan isn't sure. HRG informs Nathan that Danko and Sylar are working together. Behind them, Claire finds an old cover from 'Alice in Wonderland.' LOL--these buildings have been gutted, yet there is a nice looking cover from the book we saw in an earlier flashback? Speaking of flashbacks, Alice is lying on her bed while Angela talks to one of the boys. He's planning a getaway, but doesn't want to bring Alice. Angela tells him that she promised she'd never leave her sister. Angela walks over and tells her sister that she's going out, but will be back soon. And that she had a dream last night about Alice. That things will be safe there. Back to the present: Angela wakes up horrified. She's in a building with a bunch of old newspapers and books. She picks up a book--SHOCKER--it's "Alice in Wonderland" minus the cover. Then she sees someone coming down the stairs. She hides. Is it Alice? Why yes it is. She looks like a bag lady. Alice won't speak to Angela. She just plays a Roy Orbison song and then... 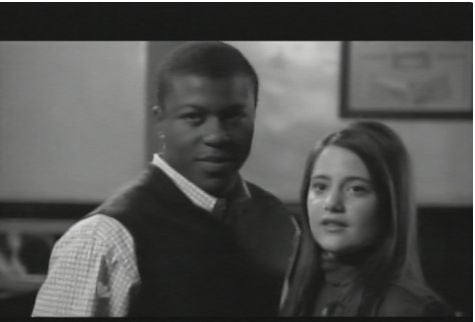 We're back in 1961 at the diner. Angela says the cops don't believe her. One of the kids asks her to dance. He's black, she's white. That's a no-no in the diner, according to the man behind the counter. The boy tells everyone that they didn't mean anything by it, and that everyone should just act like it never happened. And the whole place does as he says. He tells her everything is fine. A storm warning comes over the radio, and Angela tells him that they have to get back to Alice. But they need to pick up some socks again (ahh, those darn socks again). Back to the present: Angela reaches out and touches her sister. Alice tells her that she's alive, and that she did whatever it took to survive all these years. She stayed because Angela told her that she was supposed to stay there. She trusted Alice. She thought the world would be safe from her, and she from the world. Angela asks about that night, and Alice tells her... Flashback: Dr. Suresh is going through psychological tests with Alice, and Alice freaks out when Suresh gets to the injection part. She starts a windstorm and takes off. Dr. Suresh follows her and tries to assure her. He smacks her to get her to snap out of it, but immediately regrets it. Alice's father comes out and shoots a blast of energy at Suresh, throwing the Doctor to the ground. And then it's on. The military starts shooting. Alice slides under a building and hides. Back to the present: Angela tells Alice that she doesn't have to worry anymore. She can come home now. Then Angela tells Alice that she has plenty of socks for her. That anytime she feels lost, she steals socks for Alice. Angela apologizes, but Alice says it isn't her fault. Angela tells Alice that she lied that night--that she was trying to protect her. Alice loses it and creates an electrical storm. Just then, Peter and Mohinder come down the steps. Mohinder attempts to stop Alice, but all Alice sees is Dr. Suresh in Mohinder. She blasts him with a bolt of lightning. 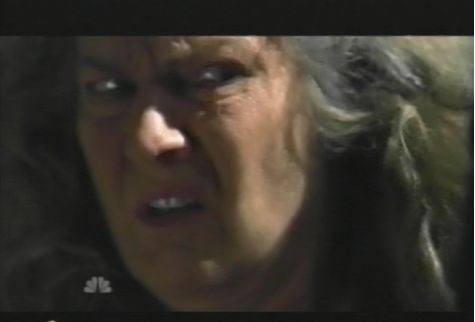 Angela tells Peter that she has to talk to Alice. She tries to stop Alice by telling her that everyone there is her family. And that calms Alice down. Angela wants Alice to come with her, but Alice says no and runs out. She's gone. Mohinder appears to be fine. He and Peter are talking. Peter hands Mohinder a film reel that he found. It's his father's work. Mohinder tells Peter he's staying. At the diner, Angela stands in the spot she danced... Flashback: Angela tells the surviving boys that no one can find out about what happened. She had a dream and they form a Company. They'll do things to do whatever it takes to keep the secret safe. Back to the present: Peter, Claire, HRG, and Nathan are sitting at that same table--the one she formed the Company at in 1961. Peter tells them that they are a family, not a Company. They need to make their existence a secret. No hunting. Nathan says he'll go back to Washington and atone for his mistakes. And then they look up at a television. Nathan Petrelli is having a press conference. Only it isn't him--it's Sylar.