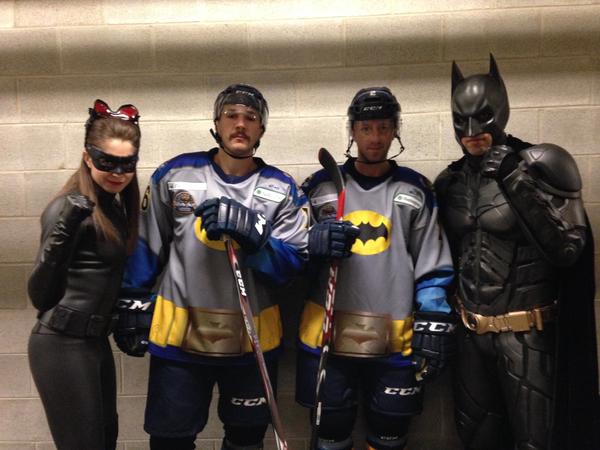 Walleye players modeling the #Batman themed jerseys that they'll be wearing this Saturday!

Is this the Walleye locker room or the #Batcave? The team will be wearing these special edition jerseys TONIGHT!

Awesome #Batman #fonts on the back of the jerseys that the Walleye & IceMen will wear this Saturday!

The Walleye, an affiliate of the Detroit Red Wings, wore Batman jerseys as the home team, while the IceMen, an Ottawa Senators affiliate, played the villains in the Riddler jerseys. The costume themed hockey game is in celebration of the 75th anniversary of Batman’s first appearance in DC comics.

Game hosts, the Walleye, dubbed the event “Heroes Night” and encouraged fans to come dressed as their favorite superheroes. There was also a salute to local heroes from the police and fire department.

Keeping true to the Caped Crusader, the Walleye triumphed with a 6-2 win but the IceMen will live to fight another day. Following the game, the Walleye said they would auction off the special edition jerseys to benefit several charities.

Hockey Teams Face Off In Batman And Riddler Jerseys