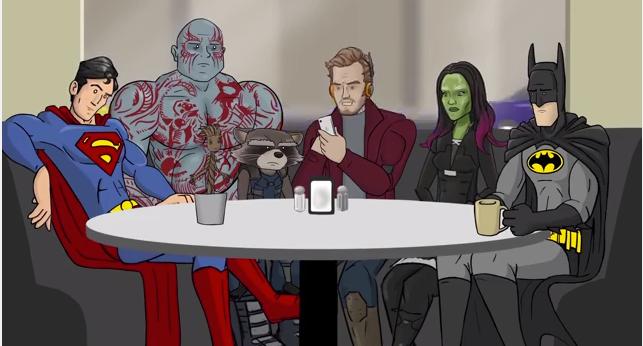 Even as one of Marvel's funniest and well-regarded films,  Guardians of the Galaxy still wasn't impervious to a little ribbing from How It Should Have Ended.

The popular YouTube series released its trademark style of blockbuster parodying on Guardians today. While the video didn't exactly call out many of the film's plot holes, as it's usually done in the past, it did have fun with the film's more absurd moments.

In the video, Star-Lord's dance-off with Ronan doesn't go as well as planned, Draxx interprets "Giving a crap" quite literally, and Thanos comes up with excuses for not leaving his favorite throne. And of course, no HISHE video is complete without a visit to Batman and Superman's coffee shop. (Naturally, Batman asks Gamora if she wants to know his secret identity.)

Check out the full video below to see Marvel's "bunch of A-Holes," put in their place.

Did anyone else ever realize that Groot and Batman had near-identical catchphrases?

How Guardians Of The Galaxy Should Have Ended