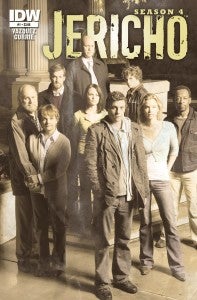 IDW announced tonight that Jericho--CBS's cult-favorite post-apocalyptic survival series, will return for a fourth season in comic book form. The show ran for two seasons on network TV before being canceled and continued in comic book form, first at Devil's Due Publishing and then at IDW. It's been nearly a year since Season Three officially ended, and it's time for IDW to revisit the property again. Written by Kalinda Vazquez and featuring art by Andrew Currie and covers by Tim Bradstreet, the publisher promises that the five-issue miniseries will be an essential part of the franchise's mythology, and overseen by the original Jericho writing staff. "Working so closely with the creators of the TV show has been a blast, their love of the material is contagious, and one of the reasons I think fans relate to it so fervently," said IDW Senior Editor Scott Dunbier in a press release. Dan Shotz, Executive Producer of Jericho, teased, "Jake and Hawkins have finally come home to Jericho and we want to personally thank those fans and IDW for allowing that to happen." IDW has had great success in the recent past with licensed properties ranging from Ghostbusters to True Blood, and has a planned Mars Attacks series by Chew writer John Layman hitting stands soon.