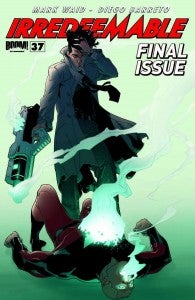 The final issue of Mark Waid and Peter Krause's terrific Irredeemable hit this week from Boom! Studios and, like so many other finales, it's hard to understand if you haven't been on board for the last few issues. As a trade-waiter myself, I'm a bit behind on Irredeemable and while most of it made sense, there's obviously a bit of "obviously you read #36, or you wouldn't be here" going on. So if you're someone who loves these characters but isn't caught up yet, do yourself the favor of reading up before you tune in for the series finale. It's a plot-heavy issue, too, and not artist 's Diego Barreto best work. It frankly looks more like a John Romita Jr. book, but lacks the quaint, epic feeling that makes Romita's pencils work. Admittedly, though, there's some widescreen storytelling on a grand scale at play here--but the character moments are all reserved for the conclusion, with most of the first fifteen or so pages just a brief showdown between The Plutonian and Qubit that sets the stage for the rest of the issue followed by Tony's last-ditch attempt to redeem himself by containing and expelling the radiation that threatens the planet. Without spoiling the end, it's safe to say that there's a bit of a meta-text twist that kind of eats its own tail a bit, borrowing from All-Star Superman's conclusion and establishing The Plutonian as arguably the most important character in the history of American popular fiction--at least in its own canon. It may, in fact, be a little too self-reverential; it's hard to say. Ultimately it's a fascinating look at the mythology behind Irredeemable, and a fitting end to the series, even if it's hard to imagine that the book is really finished, and even if Waid seems to be determined to build a through-line between his Boom! stories and his new webcomic that thematically ties them all together. 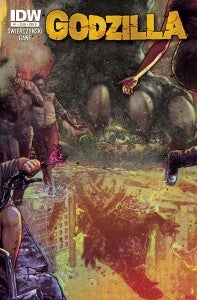 IDW, meanwhile, launched a couple of major ongoing series based on licensed properties this week. Both True Blood and Godzilla have been published by IDW for a while now as miniseries, but the ongoing books both dropped on Wednesday, and while we'll have a look at True Blood tomorrow, Duane Swierczynski has done an excellent job of setting up a Godzilla series, which is no easy task and one I wasn't positive going in was entirely doable. There is, like the Godzilla movies, not a whole lot there, but the Birds of Prey writer has done his best to make the affair somewhat more friendly to the medium. Godzilla and the other giant Toho monsters work best in motion, where the spectacle of just their existence is impressive, but in the world of comics, where anything can and has been seen on the page, it's less astounding to see a decent-looking monster than it is on film, and so the "special effects" can't carry the story in the way they can in the movies. Swierczynski has given the readers a pair of point-of-view characters, setting up a series that may be better titled "Godzilla and the Monster Hunters" (seriously--there's a little Skrull Kill Krew-type vibe  going on here) or something like that. Each of the men suffers a loss in the first issue and, bonded by a mutual history of violence, they come together at the end of the issue with a mutual goal in mind, and one that appears likely to drive at least the first arc of the series. Simon Gane's art is a great choice for the book; he has a steady hand with the monsters and a shaky one with the human characters, which is appropriate given that the foundations of their lives are literally being shaken more or less from the first page on. It looks a bit like a late '90s Vertigo title, owing something to artists like Philip Bond stylistically, and the only real gripe I can manage with it is that there's nothing particularly identifiable as Washington, D.C. in the sequences that happen there. Yes, there's the token shot of Godzilla tearing into the Capitol dome, but what I mean is that if you're going to set a story in a city with a distinctive look, and then depict it as a generic "comic book city," you'll get dinged on the scorecard a little. Oh, and while we're talking about Godzilla? Check out my favorite-ever animated short film. It's genius.