Fans and retailers in the St. Louis area are being asked to keep their eyes peeled for a large and valuable collection of Superman items becoming suddenly available in the area. As reported by Jill Pantozzi at the Newsarama blog, a mentally-handicapped man in St. Louis, IL, was robbed of several thousand dollars worth of Superman comics, toys and memorabilia this week. The St. Louis Post-Dispatch ran a story on the theft and now it's making its way into the comics community. 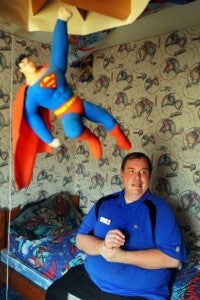 The long and short of it is that Mike Meyer, an avid lover of Superman whose massive collection began in 1974 and now fills most of the home where he lives with his two dogs. Meyer had a good chunk of that collection stolen by a man named Gary--in his mid-thirties, with dark hair and a goatee. Apparently Meyer and Gary had worked together years before at a Hardees fast-food restaurant and had a chance run-in recently at the comic shop. In what sounds like a pretty clear grift in hindsight, Gary convinced Meyer to let him come over and see his collection. He then returned the next night with his girlfriend in tow. While Meyer and the unidentified girlfriend watched a movie, Gary reportedly made off with as much Superman paraphernalia as he could carry from the guest room. Meyer noticed the theft a couple of days later and Granite City Police are on the case. Meyer's story is heartbreaking; in addition to having his wall stripped of hanging action figures and more than 1,500 comics taken (according to Meyer, he had every issue since #99), a Monopoly game, TV and old-time radio with Superman on them were all stolen as well as some lunchboxes. Some non-Superman items of personal value got caught up in the crime. With a little luck, the minimal details he knows about Gary (last name unknown) can help lead to his old co-worker's apprehension and the return of all or most of the stolen items. If you live in the area and happen to see these items come across your path (or see anything too astonishingly similar for sale online, for that matter), contact the Granite City Police Department.