In honor of tomorrow's Super Bowl XLVI, being held between the New York Giants and the New England Patriots in Indianapolis, we decided it was a good time to take stock of how some of your favorite superheroes stack up on the Gridiron. From the short-lived and the little known to the obvious and recent, here's a rundown of our ten favorite comic book super-pros--and one to grow on.

Cyborg (Vic Stone) I'm admittedly not a big fan of the character of Cyborg (or the Teen Titans in general), but it seems as though Victor Stone's identity as "football star" has simply replaced the less-glamorous "former gang member" in his character bio. That's probably for the better, since it means that the one and only African-American member of Geoff Johns and Jim Lee's Justice League won't have "gang member" in his history when kids look him up on the Internet, but it also means that he hardly counts for the purposes of this list, no matter how prominently the football aspect of his character was featured in the first couple of issues of Justice League. It seems to have been inspired by his having been a football player on Smallville, on which he was a very popular character with the viewership, and so it's certainly not out of the blue, but still not a defining part of his character--at least yet. There's still a chance that a hail mary pass might be necessary to take down Darkseid and then it'll be forever burned into League history...!

Kickers, Inc. This New Universe title was instantly forgettable, in that it's another one of those Dazzler-style "superheroes operating as fill-in-the-blanks"-style books. That said, it's a whole super-powered football team, so it's hard to leave them off the list completely. The title was canceled quicker even than most of Marvel's New Universe titles and its only enduring legacy to the publisher seems to be the partnership of Tom DeFalco and Ron Frenz, which has continued more or less to this day, with the pair working together on a number of Spider-Girl projects and a recently-reprinted run on Thor and Thunderstrike. 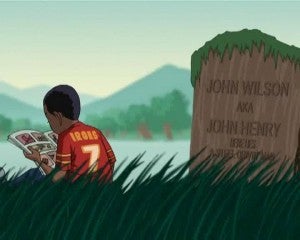 Steel (John Henry Irons) As a Justice League member, John Henry Irons (pre-New 52) had the opportunity to team up with Guy Gardner a number of times, notably during the Final Night crossover and World War III, but those weren't the first time the pair had gone into the field together. That was in college when, according to an old Showcase '96 story featuring the pair, Gardner and Irons played together on the Michigan football team. And, yes, that's the only image I can find of John Henry Irons in a football jersey. sometimes even Google Image Search fails you.

Guy Gardner Why's Guy Gardner higher on the list than his teammate at Michigan? There are a couple of reasons. First of all, the football team has become a part of his history--he's said to have been part of a championship team, and even wore the ring in an early issue of the 2006 Booster Gold relaunch in which he's shown wrestling with the choice of attending a Michigan game or the funeral of his estranged and despised father. After Guy graduated college, he didn't get to the NFL or anything, but he did eventually use his football skills as a gym teacher--and one thing that's never been directly attributed to football, as far as I can tell, but which begs some questions, is his penchant for concussions. If that can be tracked back to football, it's certainly been one of the defining aspect of his characters for decades. 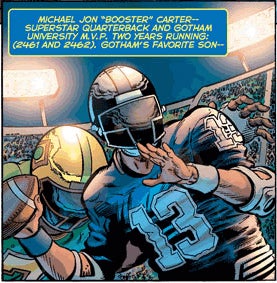 Prior to losing his eligibility in a corruption scandal, Michael Jon "Booster" Carter was one of the great college quarterbacks in the 25th Century NCAA (or whatever its equivalent league will be at that time). After the scandal, he took a job at a museum and...well, the rest is history. Literally. Booster has never completely forsaken football, though; not only did we recently get to meet Daniel Carter, his present-day ancestor who was a star football player until he was sidelined by injuries that left him in a state of arrested development (Booster himself knows a little something about that...!)...but he also managed to save the entire DC Multiverse at the end of 52 by nailing a throw using his suspiciously football-shaped sidekick, Skeets. Who says scholastic sports never helped society? 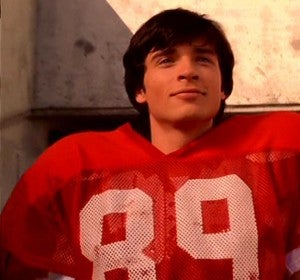 Clark Kent Yeah, it's been a bone of contention in different iterations of the legend, but clumsy Clark Kent has at various points been reimagined as someone who was a popular star athlete in high school. Post-Crisis on Infinite Earths comics saw a version of Clark whose athletic prowess--even when he was unaware of any special powers--was so impressive that it spawned a supervillain who hated him for being constantly upstaged on football fields and at track meets in Smallville. While we so far know very little of his New 52 backstory, it's not entirely unlikely that the high school football standout version of Clark survived the DC reboot--after all, it played a role in the popular and long-running live action TV series Smallville (shown at right).

Flash Thompson Spider-Man's high school nemesis is everything you expect from a high school football player--he's arrogant, tough and as likely to pick on the little guy as he is to eventually end up hosting an alien symbiote and working black ops for the US Government. To many, if you say "football in comics," Flash's is the first name that comes to mind. Flash has been redeemed in recent years, from a heartbreaking tour in the Middle East that gave him humanity in the eyes of many readers to his new role as the lead of Rick Remender's Venom, but to most fans--especially those who have been reading for a while or who only know the property from other media--he'll always just be the jerk quarterback from Peter Parker's school. 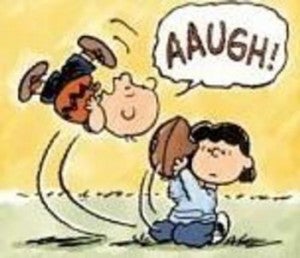 Charlie Brown Really, the award here should probably go to Lucy, who made him look like a fool each and every time he took the field. Maybe her total domination of the sport is why almost no organized leagues will let women play contact football. But it's our Ol' Blockhead who had a love for the game that kept him coming back time after time, getting humiliated every down. There's really no indication that Lucy was so much a football player as she was a sadist who played football. And, really, there's one of those at every high school and they never amount to much.

Flash Gordon While originally a polo player, most people who know of Flash Gordon know him from the 1980 movie, where the New York Jets and a Queen soundtrack made him the campiest adventure star ever to break firmly into the mainstream. He's had a number of memorable comics appearances, and among non-readers is often assumed to be the same as "The Flash," so it's probably safe to say that his inclusion on the list is only logical. Also, check out this Youtube video if you have any doubts as to his credentials. 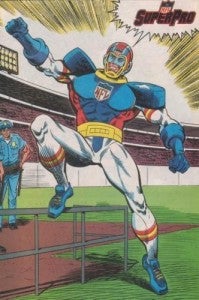 NFL SuperPro Maybe not the best-known character on this list, but certainly the most hilarious. NFL SuperPro is one of those strange properties that probably should never have happened, but for which people have an irrational fondness, probably in part because it's so self-evidently strange and silly. Looking every bit as '90s as any character ever has, NFL SuperPro is exactly what it sounds like--a superhero character created by Marvel and the NFL who is the avatar of truth, justice and football--or something like that, it's really hard to get very far into his Wikipedia entry with a straight face. The character had his own series for a year, and it was so reviled that Fabian Nicieza has never totally lived it down. According to the character's Wikipedia entry, the veteran writer admitted to writing the comic for the free football tickets that were a perk of the job--which really isn't all that surprising when you look at it. Honorable mention: Tim Tebow He may not make the list, but Tim Tebow, the sensational rookie Broncos quarterback whose outspoken religious views and controversial playing style left him in the public eye for much of the football season that just concluded, appeared on the Marvel Comics website, drawn by Bong Dazo, Scott Koblish and Todd Nauck, and then later that same week on ESPN's SportsCenter.