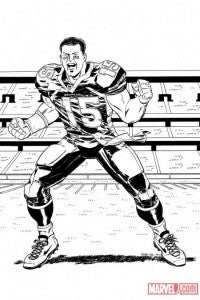 Yesterday, we reported that three Marvel Comics artists were producing some special artwork featuring Tim Tebow for ESPN. Today, the video of an ESPN Sportscenter segment featuring the Tim Tebow art has been posted online. The video features a voiceover by Chris Berman that includes lots of superhero comparisons when describing Tim Tebow.

At the beginning of the video, a close-up of Tim Tebow snarling has a Hulk-type roaring sound effect. Then, the logo “Super Tim” flashes across the screen. In the video, Berman describes Tebow as “someone the underworld despised” and “wearing the revered shield of the NFL.” Berman goes on with some more superhero language by saying “his legs like a locomotive” and “his passion an armored suit.” Bergman wraps up with, “Super Tim, a humble superhero, with his team in trouble, don’t worry he’ll show up, however late in the game it may be.”

Of course, this isn’t the first time that Marvel Comics has dabbled in NFL related superheroes. Can anyone ever forget NFL Superpro? It was a Marvel Comics series in the nineties, which featured an ex-NFL football player in a near-indestructible football uniform. Could we one day dream of a Tim Tebow vs NFL Superpro crossover series? 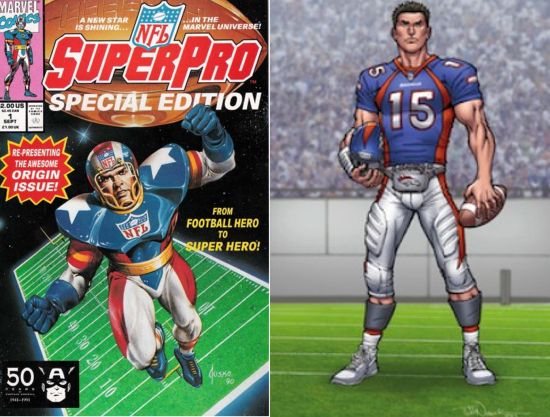 While the return of NFL Superpro might be a little far-fetched, it’s likely this isn’t the last NFL related art we will see by Marvel Comics. One of the reasons the Tim Tebow artwork came to be is that Disney owns both ESPN and Marvel Comics, so more sports related collaborations involving Marvel Comics artists could be a very real possibility. What other NFL superstars would you like to see get the Marvel Comics treatment?

Tim Tebow As A Superhero On ESPN Sportscenter