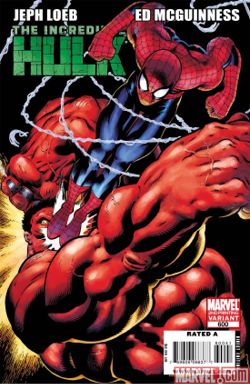 has announced that Incredible Hulk #600 has sold out at the distribution level. Therefore, Marvel has also announced that they will be going back to press to print a second edition of this important Hulk issue. The Incredible Hulk #600 Second Printing Variant is scheduled to arrive in comic book stores on September 9, 2009. In addition to the Hulk, Incredible Hulk #600 also features a special guest appearance by Spider-Man. The issue covers some of the secrets about the origin of Red Hulk. Incredible Hulk #600 was written by Jeph Loeb with art by Ed McGuineess. It also leads into Greg Pak's Incredible Hulk #601 while Loeb and McGuinness continue on Hulk. In addition, there is a tale of The Savage She Hulk by Fred Van Lente, and the Jeph Loeb/Tim Sale Hulk Gray #1 is re-presented. The Incredible Hulk #600 Second Printing Variant will feature the interior art of McGuinness on the cover. "Wow! What a great way to celebrate this anniversary!" said Jeph Loeb. "All of us in the Hulk office -- Ed McGuinness, Mark Farmer, Greg Pak and Ariel Olivetti -- as well as our amazing editorial team of Mark Panniccia, Nate Cosby and Jordan White -- are so grateful to the readers, fans and retailers who've made Hulk such a success. Hulk #600 kicks off our second year which shotguns into the mega story World War Hulks. All this plus being able to work side-by-side with Greg Pak makes Hulk #600 the perfect jumping on point for both Hulk titles!"