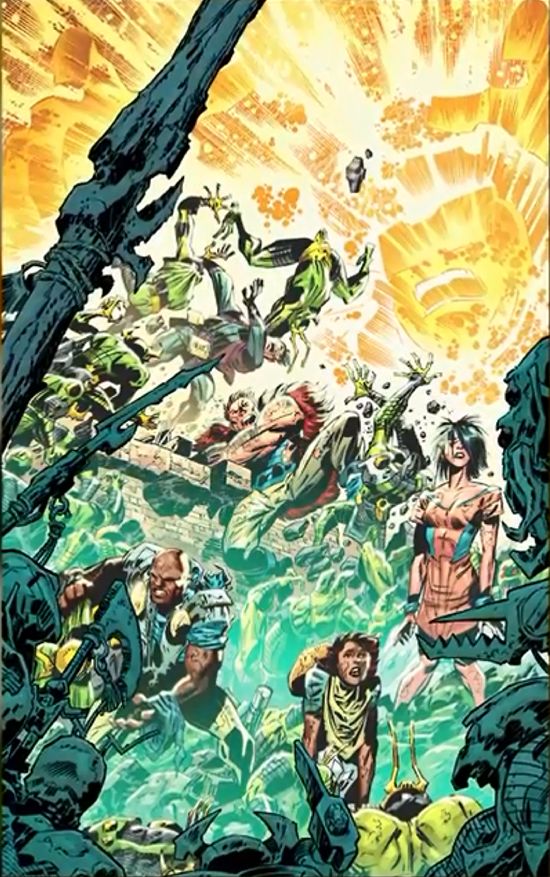 DC Entertainment Co-Publisher Dan DiDio and veteran writer/artist Keith Giffen, who last collaborated on the short-lived but well-reviewed New 52 monthly series based on Jack Kirby's O.M.A.C., will apparently launch a new Forever People series this year. Earlier this week, DiDio tweeted at a fan that he and Giffen had "an old cult favorite" ready to relaunch, but has since deleted the tweet. You can see evidence of it on Google, where it remains archived, but if you click on the link it's gone. What you can still find is a solicitation tease on DC's website, which reads:

"Four of the best students from New Genesis arrive on Earth to study and aid in the advancement of humanity – but they soon discover a darker purpose to their mission: a threat so great that it may bring the multiverse itself to its knees! The only thing that stands between them and total destruction is the mysterious entity known as the Infinity Man! "Don't miss the start of this new series by Dan DiDio and Keith Giffen, the team that brought you the over-the-top adventures of O.M.A.C.!"

The announcement officially came on the All Access broadcast released earlier today, which you can see below. The original Forever People were a group of young New Gods who were on a mission to oppose Darkseid on Earth, and talked, dressed, and acted much like the flower children of the 1960s. No word on whether the '60s themes will carry over or if they'll try to do something more representative of a modern countercultural movement. This may be a relaunch of DC's moribund "Young Justice" line, which started the New 52 with promise but now has seen the cancellation of most of its titles, even the reliably-selling Teen Titans. There's already been speculation that titles like Young Justice and Gen 13 may show up in the DC line soon.