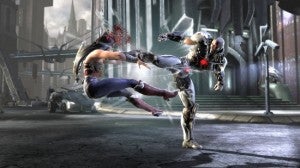 While San Diego slept, Warner Bros. Interactive and DC Entertainment took the lull in coverage as an opportunity to release a new gameplay trailer for their upcoming Justice League video game, Injustice: Gods Among Us. The trailer, which shows off some of the new characters recently introduced at San Diego Comic-Con International, promises a ton of action and creative uses of powers. Fans interested can play the game at Comic Con's DC Comics booth (#1915). Says Warner,

"Injustice: Gods Among Us is an all-new game in development by award-winning NetherRealm Studios, creators of the definitive fighting game franchise Mortal Kombat. The game is scheduled for release in 2013 for the Xbox 360® video game and entertainment system from Microsoft, PlayStation®3 computer entertainment system and the Wii U™ system from Nintendo. Injustice: Gods Among Us debuts as a bold new fighting game franchise that introduces a deep, original story featuring a large cast of favorite DC Comics icons such as Batman, Cyborg, Harley Quinn, Nightwing, Solomon Grundy, Superman, The Flash, Wonder Woman and many others.  Set in a world where the lines between good and evil are blurred, players will experience heroes and villains engaging in epic battles on a massive scale."