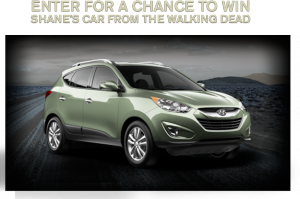 In spite of the fact that many comic book fans are chomping at the bit for AMC's The Walking Dead to catch up with its comic book counterpart in its handling of Shane Walsh, the character remains popular enough with the TV audience that he's clinging to life in spite of his fellow survivors on the show dropping like flies.

Can the car he picked out be key to his survival? Well, you can find out! Between now and the end of the year, AMC is giving fans a chance to enter to win the Hyundai Tuscon used on the set of The Walking Dead. "Hundreds of cars are stranded on an abandoned highway and Shane Walsh tasks himself with repurposing one to ride out the apocalypse. Now one lucky fan will win that same set of wheels," says the site for the contest.

Click on over there and enter to win! But if you do, remember I sent you and that you owe me a ride.

Is a Hyundai the Key To Living Longer Than Expected? THE WALKING DEAD Thinks So...