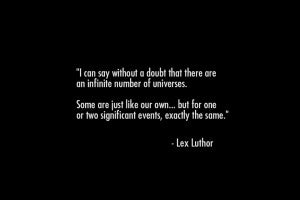 DC Entertainment, if you haven't noticed, has been getting more aggressively into the video game business of late. Even if you don't consider the recently-announced Fables video game, you've still got Injustice: Gods Among Us hitting this month, with a free-to-play mobile version already available. And this week saw the formal announcement of Batman: Arkham Origins, a sequel to the popular Arkham franchise. And then there's Infinite Crisis, a MOBA set in the DC Multiverse and featuring a number of popular Elseworlds adaptations of the characters like vampire Batman, Red Son Superman and probably even Carrie Kelley, who was introduced into the mainstream DC Universe earlier today. But what's interesting about all of this is that Injustice: Gods Among Us, ostensibly a simple fighting game set in a stand-alone universe, features the quote above, hinting to the existence and importance of a Multiverse, in its opening game screen on the iOS app. Our first thought: Does that mean the Injustice story and characters will lead into, and be playable in, Infinite Crisis?

Is Injustice: Gods Among Us a Prequel to Infinite Crisis?