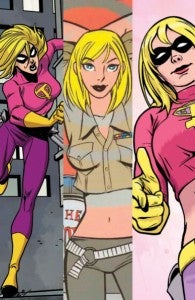 This week, It Girl and the Atomics #9 will hit comic stores--fans should enjoy it while it lasts, because writer Jamie S. Rich confirmed today that the series will end with July's #12, as was announced in the Image Comics solicitations. "I am really proud of how It Girl and the Atomics turned out. I am proud of shipping a full year of monthly comics on time and not just maintaining the quality, but I'd like to think improving issue to issue," said Rich on his blog. "As a writer, I was blessed to work with some exceptional people. Mike Norton, Chynna Clugston Flores, and Natalie Nourigat–you can't ask for a better line-up of artists than that. And Allen Passalaqua, Crank!, and the Allreds, the foundation every issue was built on." He added, "There were a number of factors contributing to the decision, but it was the right one to make and the right time to do it. Hopefully the twelve issues we did will stand strong as a complete series whether I ever make it back to do more or not. (I have a few ideas for stories, but it will all be a matter of timing.) I wrote #12 special to cap off everything that had come before, which is why I corralled all the artists from the series to give it one more go."

It Girl and the Atomics Ends With July's #12