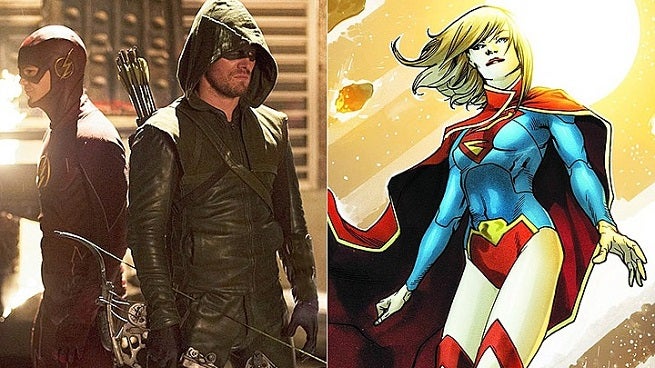 As part of a multi-party interview with The Hollywood Reporter in which Arrow's Marc Guggenheim interviewed and was interviewed by Agent Carter  showrunners Tara Butters and Michele Fazekas, Guggenheim confirmed rumors that a Supergirl crossover with The Flash and Arrow would not be out of the question when CBS launches the story of the Last Daughter of Krypton in the fall.

A reporter from THR then chimed in that it was in fact built into executive producer Greeg Berlanti's contract at CBS that such a crossover would occur, and Guggenheim didn't respond, seemingly confirming the rumor by his silence (although that might be reading into things).

Here's the pertinent piece of conversation:

Fazekas: Marc, CBS is doing Supergirl. What is the possibility of a crossover?
Guggenheim: It's possible.
THR: I actually heard it's in Greg's deal, that Supergirl can cross over with Flash and/or Arrow.

Since CBS is a co-owner with Warner Bros. of The CW, almost no one has claimed it was outside of the realm of possibility for such a crossover to take place,but if THR is right that it's actually built into the contract, one assumes it's something they're planning for.

It's Possible Supergirl Will Cross Over With Arrow And The Flash