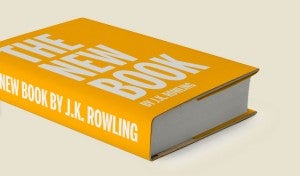 J.K. Rowling, the creative mind behind the Harry Potter phenomenon whose Twitter page identifies her simply as a "children's author," has announced through her agents that she has a new book coming soon, this one geared toward adults. "Although I've enjoyed writing it every bit as much, my next book will be very different to the Harry Potter series," says a hand-written note from Rowling on her agents' website, sentiments echoed word-for-word in a short statement she released to the press on the project. The title of the book has not yet been released. The Los Angeles Times says that it will be published by Little, Brown at a release date to be determined, but that it will be simultaneously released in the United States and the United Kingdom. "The freedom to explore new territory is a gift that Harry's success has brought me, and with that new territory it seemed a logical progression to have a new publisher," Rowling wrote on Thursday. "I am delighted to have a second publishing home in Little, Brown, and a publishing team that will be a great partner in this new phase of my writing life."