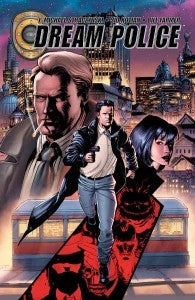 This April, Image Comics is hoping fans will join Dream Police Detectives Joe Thursday (not Joe Friday from Dragnet) and Frank Stanford as they patrol the dreamscape in Dream Police, written by J. Michael Straczynski with art by Sid Kotian. Joe and Frank (not the brothers from Bruce Springsteen's "Highway Patrolman," which became a film called The Indian Runner by Sean Penn that dealt with the theme of dreams a lot) have been partners for as long as they can remember, patrolling the alternate universe of dreams, nightmares, and the great void beyond, an alternate but very real dimension of changelings, echoes, wisps, ethers, and nightwalkers, those that died in their sleep and wander the dreamscape forever. But when Frank steps away and disappears… and the woman who returns says she's Joe's partner, that she's always been Joe's partner… he begins a journey into the unknown that will shake the dreaming down to its very foundation. While growing up, Straczynski says that he moved 20 times by the time he was 17 years old. This lack of continuity as a child led him to imagine his own "hometown," a community that he patched together with different memories from all the different places he'd tried to settle, and visited only in his dreams. "I've been fascinated with the idea that the dreamscape is a real place, stitched together from echoes of the physical world, where we go to find some measure of relief, or adventure, or understanding," said Straczynski. "If that's the case, then there has to be some means of providing order and protecting dreamers from danger… which led me to the notion of the Dream Police."