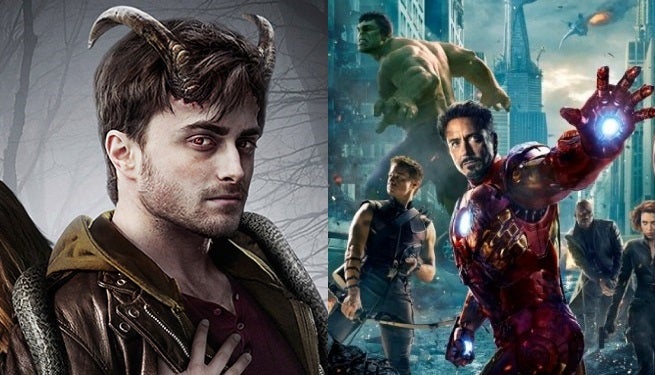 On last night’s episode of Late Night with Seth Meyers, author Joe Hill appeared to promote the new film Horns, which is based on his novel of the same name.

Horns is a novel Hill wrote because he wanted to write about the Devil, which, he explained, is a character he feels gets a bad rap.

“The thing is, I feel like the devil could be right on the Avengers,” Hill explained. “He’s like a superhero. He punishes the bad guys, he’s got a cool look; he has horns and the red costume. On his very first adventure, he freed two naked prisoners being held in a jungle prison by a megalomaniac, and, in the process, he introduced fruit into their diet, and sort of taught them about their own sexuality, which I think makes him like a cross between Animal Man and Dr. Ruth. That’s awesome.”

Horns, a supernatural thriller driven by fantasy, mystery and romance, follows Ig Perrish (Daniel Radcliffe), the number one suspect for the violent rape and murder of his girlfriend, Merrin (Juno Temple). Hungover from a night of hard drinking, Ig awakens one morning to find horns starting to grow from his own head and soon realizes their power drives people to confess their sins and give in to their most selfish and unspeakable impulses – an effective tool in his quest to discover the true circumstances of his late girlfriend’s tragedy and for exacting revenge on her killer.

Horns is now in theaters, on iTunes, and On Demand.

Joe Hill: The Devil Could Be on The Avengers