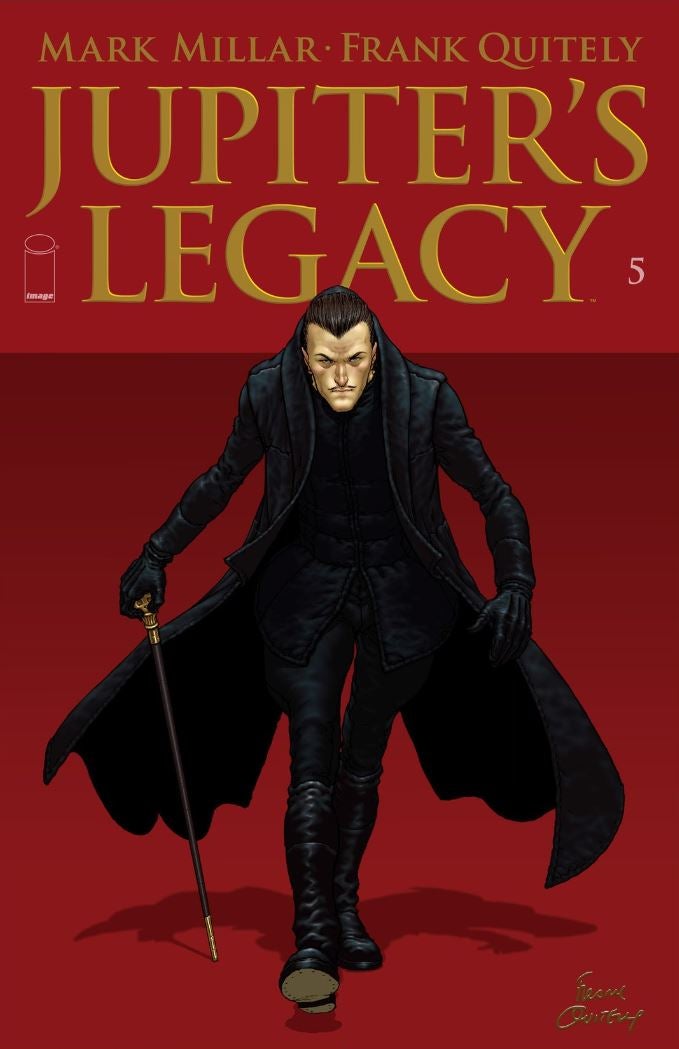 Jupiter's Legacy debuted almost two years ago and even one week ago I still wasn't sure what I thought about it. I knew that I had strong feelings about the series, but wasn't sure what way they went, towards love or hate. It is a beautifully executed comic with some of the most ludicrous and intricate panels to ever be drawn by Frank Quitely's pencils. Yet the first couple of issues contains some of Mark Millar's worst instincts as a writer with excessive sex, language, and violence untempered by much thought or purpose (banal political quotes were just the icing on the cake). Jupiter's Legacy #5 is the issue where I recognized exactly how I feel about this series as a whole.

The conclusion of the first "book" in this series brings both Quitely's incredible talents and Millar's ability to genuinely care for both his writing and audience that was only recently rediscovered in the pages of Starlight. His script for this issue provides action, dramatic beats, and page turns worthy of Quitely's craft. Together, they've created a superhero comic that embraces the genre so hard it may have cracked one of Stan Lee's ribs.

Proclaiming a Frank Quitely comic to be masterfully done or perfectly executed is about like saying that Alan Moore isn't a fan of mainstream superhero comics or Saga seems to be popular. It doesn't need to be said. Of course, Frank Quitely draws beautiful, innovative comics art. That's what he does. It is worth parsing through his work in Jupiter's Legacy #5 in order to discover how he continues to move the needle, raise the bar, and show us all what comics are capable of. (Minor spoilers follow.) 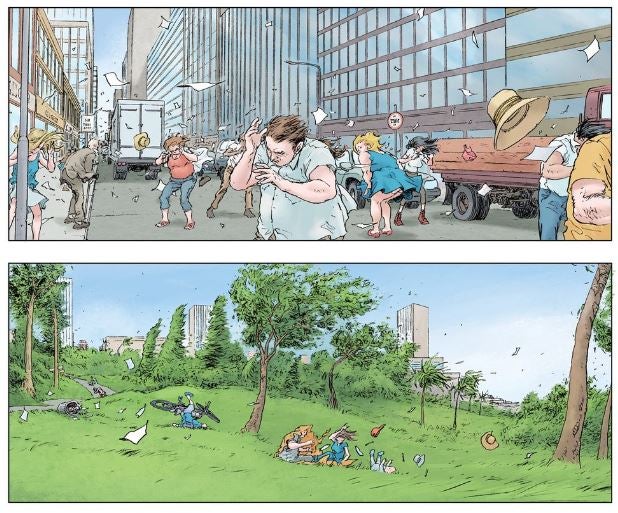 The action sequence that fills the second half of Jupiter's Legacy #5 is everything I want in a superhero slugfest and it begins with a simply incredible page turn. Quitely frames the page turn with a right-facing page composed of four wide panels. The first panel features Jason, the eight year old, super powered son of Chloe and Hutch has been discovered by Barnabas Wolfe, the man in charge of hunting superheroes and villains. The situation is bleak and as Jason cries for his mother, Barnabas tells him that his mother cannot hear him. It's a setup that begs for a punchline, one that Quitely builds to in the following three panels.

The three panels display three distinct landscapes across Australia with a massive rush of wind pulling at clothing and trees, and some unknown force melting the guns pointed at Jason. Quitely's compositions draw both the action and the reader's eye forward and outward almost pulling at the page itself. Without even showing her, Quitely plays off of the setup in Millar's dialogue to present Chloe's arrival. You know exactly what is coming when you turn the page and see a large splash panel with Chloe standing in front of her son ready to protect him, but it still lands with a glowing feeling of triumph. All of the power shown in the three previous panels was generated by this one figure posed in defiance. It's difficult to resist shouting in joy when that page is turned. Even a laughable and unnecessary retort in Millar's script can't detract much from the moment.

The setup and punchline of those two pages also serve as an extended setup for the fight itself, and very few comics artists draw violence as well as Frank Quitely. Each panel reflects a carefully made choice of moment. There is an awful form of ballet at work in the action of Jupiter's Legacy #5. Wide, sweeping gestures and grandiose arcs of blood spiral towards and away from one another. In one panel Chloe is punching Barnabas in the face. As his head shatters the wall behind him in a circular pattern, a loop of his own blood washes over Chloe's fist brought forward by inertia. It is comics made to appear in slow motion, a finely crafted snapshot of chaos.

Hutch's entrance to the battle is created through an insane act of violence that is equal parts shocking and hilarious. Quitely juxtaposes two panels with the same focus between two pages, each showing a large number of soldiers rushing at his family. In the first they are a long, black line of men ready to crush anything in their path. In the second they are literally crushed by the long, black form of a teleported train carrying Hutch. That same balance of setup and punchline that is so integral to comedy is equally important within action. The first panel provides a visual and story-based opening of which the second takes full advantage.

This climactic battle wouldn't hold much impact or emotional resonance without an antagonist capable of driving action forward and instilling fear in readers. Barnabas Wolfe is just such a villain and his entire story is told in the course of a single issue. Millar manages to introduce Wolfe displaying his personality, mindset, and powers, describe his place and significance within this world, build tension over his hunt for the family, and release that tension in a spectacular way all in less than 40 pages. While Jupiter's Legacy #5 is only a chapter of a larger series, it contains a completed character arc and reveals Millar again as a writer with real chops.

It's easy to imagine Millar watching Inglorious Basterds on Netflix as he crafted this script, taking notes on Christoph Waltz's Colonel Hans Landa. Wolfe is composed, clever, and draped in the cold, sinister aura of a wolf amongst sheep. The opening sequence of Jupiter's Legacy #5 is strikingly similar to Landa's own introduction, building increasing tension through direct dialogue before snapping and releasing a torrent of violence. The manner in which Wolfe breaks the tension is a clever piece of writing above the gorey, direct tricks Millar tends to lean upon so heavily.

Wolfe's custom of dress is purposefully chosen: an all black trenchcoat covering an elegant black suit. He is revealed to be an exacting man concerned with appearance and a black-hearted villain. Colorist Peter Doherty takes full advantage of this color scheme, creating a juxtaposition between Chloe's family and Wolfe's forces that stages the battle in black and white. There's no moral ambiguity to be found or questions to be asked. It is big superhero action with the good guys and bad guys clearly outlined.

Millar compared Jupiter's Legacy to Watchmen when it was first released, and even then it was a plainly silly line of hype. Jupiter's Legacy is nothing like Watchmen, and that's a good thing. Rather than trying to be something it's not, Jupiter's Legacy embraces what it is. It is a big love letter to the superhero genre, one that sincerely loves the big battles, clear distinctions, and grand statements of men and women in tights. This is the kind of story that Millar and Quitely are both perfectly suited to tell. Now that they are embracing the central premise of their story in the form of a young boy with an incredible streak of altruism, they are able to deliver a truly incredible comic, one that is hard not to love.

Jupiter's Legacy #5 is a Comic Worth Waiting For (Review)