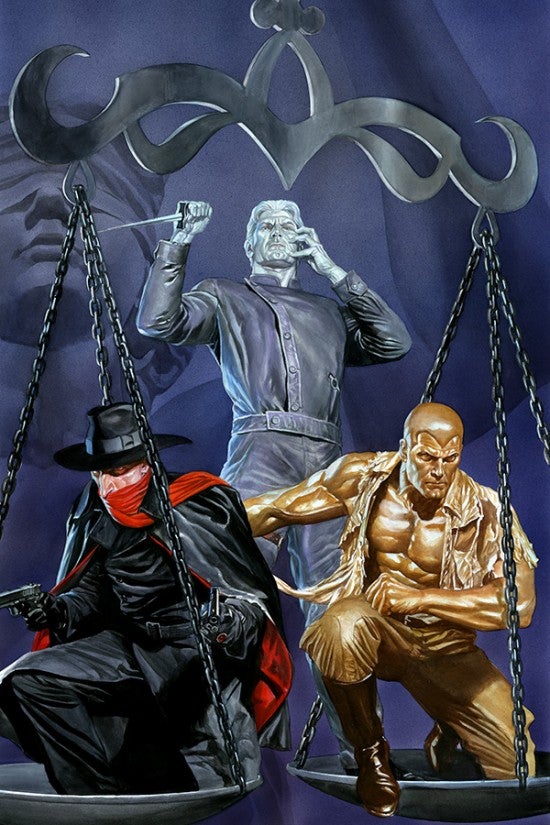 Michael Uslan, who is slated to produce the forthcoming Doc Savage movie from Iron Man 3 director Shane Black, will write a new series for Dynamite Entertainment called Justice Inc., in which Savage will team up with The Shadow and The Avenger.

The Avenger has often fronted a group called Justice Inc. in the past, with talents like Jack Kirby, Joe Kubert and Kyle Baker working on the property in the past. Dynamite's Justice, Inc. #1 will be released in August 2014 and is written by Uslan with interiors by Giovanni Timpano and covers by Alex Ross, Francesco Francavilla, Stephen Segovia, Ardian Syaf and Gabriel Hardman.

"Doc Savage inspired the creation of Superman. The Shadow directly inspired the creation of Batman. The Avenger sparked the creation of a multitude of...well...Avengers!" Said Uslan, who has served as a producer on a number of Batman films including The Dark Knight. "What an honor to write a story starring them all! It's always been beyond my comprehension how Street & Smith pulp magazines and comics never ever in 75 years teamed the three of them up! Can you imagine if up till now DC had never crossed over Superman, Batman and Wonder Woman? Could you grasp Marvel never teaming up Captain America, Sub-Mariner and The Human Torch? I love history! And THIS, fellow fan-boys, IS history! I am so excited that this task has fallen to me. I love these characters and knew Walter Gibson, creative force behind The Shadow. I feel a personal obligation to him to do the very best job I can, and I'm grateful to Nick Barrucci and the Dynamite team for making this happen at last!"

"Michael is one of the most inspired and versatile writers in the industry with his experience in comics, film and prose," said Dynamite CEO / Publisher Nick Barrucci. "Michael doesn't write many series due to his schedule, but when he does, he puts all of his energy and a passion that few can bring to a series, and it shows.  This IS a historic cross-over, and we couldn't be more pleased that Michael is the person spearheading the series.  And the best part is that Michael will use his PR machine to help promote the series every issue in stores for retailers to help them have higher sell through as more fans will know of the series.  And nothing is more exciting than having a series reach as many readers as possible."

Justice, Inc. To Team Doc Savage, The Shadow, The Avenger At Dynamite