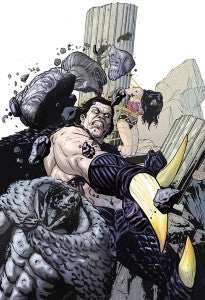 The Villains Month titles for Justice League of America and Wonder Woman, possibly the last two batches of such titles that will be solicited for September, were released earlier today, with First Born and Cheetah joining Killer Frost, Black Adam, Shadow Thief and the previously-announced Deadshot. Wonder Woman #23.1: Cheetah will arrive in stores September 19th, by John Ostrander with art by Victor Ibanez, reports Uproxx, who also have Brian Azzarrello and Alex Cal's First Born as Wonder Woman #23.2. The Huffington Post reports that Justice League of America #7.1: Deadshot will be in stores from Matt Kindt and Pasqual Ferry; it will be followed by #7.2: Killer Frost by Sterling Gates and Delris Santacruz, #7.3: Shadow Thief by Tom DeFalco and Chad Hardin and #7.4, which is kind of the main event. That issue, by Geoff Johns and Sterling Gates, will feature art by Edgar Salazar and introduce Black Adam into the New 52.