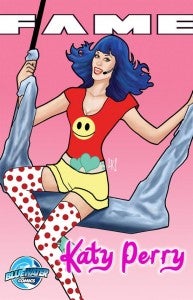 Fame: Katy Perry tells the story of Katy’s journey from Christian singer to pop superstar, as well as story of her marriage and divorce. According to a description from Bluewater, “The pop starlet has dominated the music world for the past several years with hit single after single, star-studded collaborations, sold out worldwide tours, and record shattering platinum albums. She serves as a testament to girls everywhere that they can be whatever they set their mind to.”

Also of note, Katy Perry: Part of Me 3D is set to be released in Imax theaters nationwide on Fourth of July weekend, so it’s good timing on the biography comic book release. Fame: Katy Perry is written by Daily News columnist Howard Gensler and illustrated by Eduardo Bazen.

"This is a colorful and fun bio that every Katy Perry fan has to add to his or her collection," Bazen said, “I hope every Katy fan enjoys this book as much as we enjoyed working on it!"