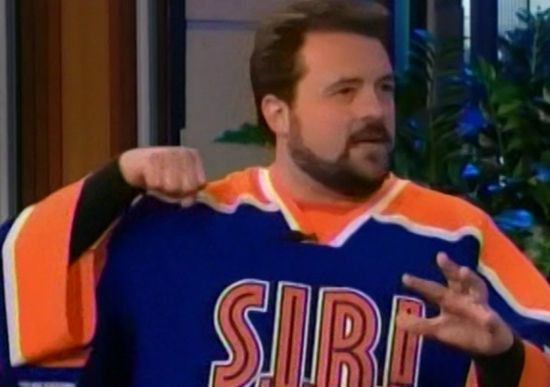 Kevin Smith appeared on the Tonight Show with Jay Leno on Friday, March 23, 2012 to promote his new book. Leno wasted no time in asking Smith about Bruce Willis, who Smith directed in Cop Out. At first, Kevin Smith joked, "It was good. We had a great time. I love him. Moving on." But Leno wouldn't settle for that answer and pressed on, asking what happened and if they didn't hit it off. Then, Kevin Smith answered, "We really kind of butted heads. I've been thinking about it for two years. This is the way I can finally sum it up. It goes like this. It was my fault. I went in there expecting something. I went in there expecting the guy I've seen in the movies and on TV and whatnot. And I had never in all my career, I had never worked with a major movie star before. Please do not tell Ben Affleck that I said that. But he was a movie star, and I wasn't equipped to kind of deal with that person." Smith then relayed a story about a confrontation with Bruce Willis on the set of Cop Out. After Smith finished a take, Bruce Willis waved Smith over saying they weren't done yet. Smith joked, "Ok, everybody, hold on one second. I'm going to go talk to the director." According to Smith, Willis then said, "What did you say?" To which Smith attempted to explain it was a joke.

Smith said that Willis then asked him to clear the set. After the set was cleared, Willis asked him, "Do you want to take a swing at me?" Smith said he thought he was in a Die Hard movie. Fortunately, Smith said he and Willis were able to settle it with words, so no punches were thrown between the two. However, in frustration, Smith went back to his trailer and punched his fist through the wall three times.