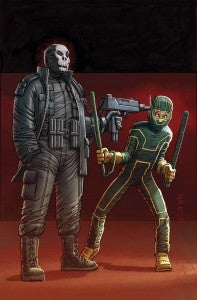 Earlier this week, we reported on some comments by Kick-Ass co-creator and writer Mark Millar, who indicated that Hit-Girl might yet have another adventure in her--if only he and artist/co-creator John Romita, Jr. could find the time to do it. Romita, for his part, hasn't commented on that one story specifically but during our in-depth Q&A last week, he did suggest to us that there could be more--quite a bit more--Kick-Ass had he been able to work it out, scheduling-wise. "I was under contract to Marvel and I didn't want to do the irresponsible thing and just quit Marvel to work on Kick-Ass alone. That would have caused a lot of trouble, if I had done that. so I had to stick to my Marvel contract and that caused us not to do as many arcs of Kick-Ass as we could have," Romita told ComicBook.com. "So we ended up doing four arcs, if you count the Hit-Girl arc. We probably could have done seven, probably could have done eight, who knows? Mark said he would have been more invigorated if we had done it more regularly. Unfortunately it couldn't have been done, it couldn't have been avoided. It was the way it was." The artist added, "I think also there's a good possibility if you do eight arcs, maybe it gets diffused a little bit and maybe it wouldn't have sold as well, later on in the run. The fact that we got four arcs, maybe because there's less material...I don't know. I'm not going to second guess. I don't regret that i didn't get enough done to go past four arcs. It just became such a load of work Marvel had demands on me as well and that's just the way it was."

Kick-Ass 7? There Could Have Been Lots More Comics...