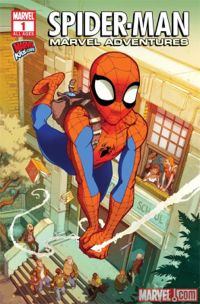 Who says comic books aren't for kids anymore? While the majority of modern day comic books target older readers, Marvel Comics is doing their part to bring in new comic book readers. Marvel has announced two new ongoing all ages series. The two new titles are part of the Marvel Adventures line. Spider-Man #1 and Super Heroes #1 will launch with oversized debut issues. Both premiere issues will be packed with full length all-new stories and bonus back up stories and will retail for $3.99. Both issues are scheduled to arrive in comic book stores in April. Later issues will be regular sized and priced at $2.99. "The Marvel Adventures line has been a runaway success for over 5 years now," said Marvel's Senior Vice President of Sales David Gabriel. "We're extremely proud of not only the longevity of the line and the strength of the brand, but also of the quality of all the series. These are the perfect starting point for the youngest of readers. You're going to see all the biggest Marvel heroes—Thor, Iron Man, Captain America and more—appearing in Super Heroes. Along with Spider-Man, these books are a fresh new start for the Marvel Adventures line—but with the same unparalleled all ages storytelling you've experienced!" Spider-Man #1 follows Peter Parker as he balances homework, family and saving New York from the deadliest villains around. Spider-Man #1 is written by Paul Tobin with art by Matteo Lolli. Super Heroes #1 follows Iron Man as he unites a team of super heroes. The newly formed Avengers battle Magneto's Brotherhood of Mutants. Super Heroes #1 is written by Paul Tobin with art by Ronan Cliquet.