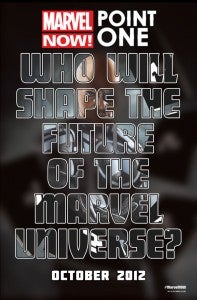 Marvel has released a teaser image featuring Sgt. Marcus Johnson, Nick Fury's illegitimate son who Entertainment Weekly recently revealed will be called Nick Fury after the Marvel NOW! relaunch takes place, and indicating that a Marvel NOW! Point One issue will be announced at the Cup o' Joe panel at San Diego Comic-Con later this week. The panel takes place on Friday at 3:15 PST (6:15 Eastern), and will presumably see Quesada announce the book. What are the odds that, as has happened in the past with monumental single issues like this, Quesada will himself step in to draw it--or at least provide the cover? Pretty good--I'd be willing to bet the art that's been circulating for the last week as Marvel NOW! promo art is in fact this issue's cover. Either way, according to the text accompanying the teaser image, the Cup o' Joe panel will reveal "Who will shape the future of Marvel NOW?". Were I a betting man, I would put a goodly chunk of my money on Marcus "Nick Fury" Johnson, considering the image. When the character first appeared, not much was known about him. In the last year, it's been discovered that he's the son of Nick Fury, and then he's gone on to sustain the family's iconic eye injury, so that when they start calling him "Nick Fury," he looks more like the version fans expect from the billion-dollar movie. ComicBook.com will be at the San Diego Comic-Con International all weekend, bringing you reports from the floor, so check back with us shortly after 6 p.m. EST on Friday to find out what's going on, who the creative team is, and probably see some more images. Marvel's pretty good about sharing those things both in the panel and at their events page online.