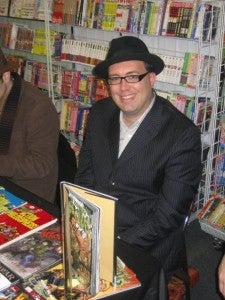 Newsarama's Graeme McMillan posted this morning about comments made by Marvel Editor-in-Chief Axel Alonso at his regular Comic Book Resources column. Alonso had told CBR that "new budgetary mandates" led the company to end the fan-favorite Alpha Flight series by Fred Van Lente (pictured left) and Greg Pak. Prior to its cancellation, the series had been performing well enough as a 12-issue maxiseries to make the transition to ongoing status. Over at Bleeding Cool, meanwhile, Twitter comments from Van Lente revealed that his Destroyers miniseries with Kyle Hotz--promoted by Marvel ads but never formally solicited--"got the axe weeks ago." While the quote about "new budgetary mandates" wasn't specifically cited in regard to Destroyers and the recently-canceled Victor Von Doom by Nick Spencer and Becky Cloonan, it seems likely that such a broad statement can be easily applied to the series which were canceled without explanation, and which, according to the creators in question, were humming along nicely with completed art when the end came.