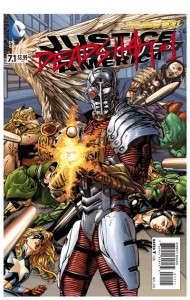 Arguably still best known for his creator-owned work, for which he's won numerous awards, he didn't shy away from Big Two comics when invited to play in the big intellectual property sandbox at DC Comics. When last we spoke with Kindt, he was just taking over Frankenstein: Agent of S.H.A.D.E. from his friend Jeff Lemire and launching Mind MGMT--which now has a movie deal in place, by the way--at the same time while prepping to take on the Martian Manhunter backup stories in Justice League of America. The intervening time hasn't made him any less busy; he may have lost Frankenstein to cancellation, but when that happened he earned more DC work, including an ongoing gig as the new writer of Suicide Squad.

What does the writer of a team of villains do when the entire publishing line shuts down for a month to celebrate the villains? Well, we asked him a bit about that...

ComicBook.com: I'm a great fan of Mind MGMT, and you're doing some great work at DC...but it seems like every time I stop and take a breath, you're getting a new gig at DC these days. What all are you doing them for the next month or six?

Matt Kindt: I don't want to talk about it! [Laughs] No, I'll just write whatever they give me and I've been lucky enough that they like what I've done and they keep asking me to do stuff. It's hard for me to turn down because I grew up reading this stuff so I'm a fan of all of these characters.

I'm not turning anything down! I love Suicide Squad, I love Justice League, I love Martian Manhunter especially. I like Deadshot, he's awesome. I got to do a Sinestro villain issue which was a new one for me.  Green Lantern I hadn't grown up reading so I'm more of a new convert to that, but he ended up being one of my favorites. I'm doing a Solomon Grundy issue that was like--you can't turn that down either. There was nothing they gave me that I was like, "Eh, I don't know..." All of it was exciting.

ComicBook.com: Suicide Squad seems to be a perfect fit for you, given some of your creator-owned work. Are you looking forward to bringing some stability to a title that's been kind of up and down in terms of reception since the launch of the New 52?

Kindt: Honestly, I liked the book in the '90s when Ostrander was writing it. I went back and dug those issues up because I remembered liking it. What's funny is as an adult, I haven't read those for a long time and then I get reacquainted with it and it's like, "That's the stuff I grew up on. It sort of informed who I am now."

So I think I'm attracted to the book because I liked it and also the creator-owned stuff I do is also sort of informed by some of that stuff I read when I was a kid. Definitely I love that book and I've always liked it. I've read the new stuff and I like what he was doing right before me--those issues are great. I feel like I have to live up to the good stuff that's already happened and hopefully I do.

ComicBook.com: Are you going to be changing directions pretty radically or is it really just you putting your stamp on the existing book?

Kindt: I can only speak for the first five issues because that's the only thing that's really set in stone. After that I have ideas that I've pitched and outlined and everything, so we'll see.

Those first five issues are going to be kind of messed up because of Forever Evil--and not messed up in a bad way, but messed up in that the villains are messing everything up so it's going to be interesting having villains on a team of heroes and what are they and where's their incentive? Everything's crazy--Belle Reve is going to be falling apart for a while and they're all scattered to the wind so it's like, how does Amanda Waller get this group of outcasts to work together? There's no incentive anymore. Part of the fun is trying to figure out what is their motivation going to be, and who's going to go against them. I sort of have a reverse Suicide Squad--a team of good guys who are forced to do bad that they're going to end up fighting and I think that's going to be fun.

ComicBook.com: That's such an obvious thing! I'm shocked nobody's ever done that before!

Kindt: It's crazy. It's like, who's the natural enemy of bad guys doing good? Well, it would be good guys doing bad.

ComicBook.com: Do you ahve any favorite characters that you'd like to see rotate through the Squad? Obviously the lineup is fairly malleable most of the time.

Kindt: Honestly I gave my editor a list of 20 characters that I wanted to use in some way or another --I basically gave him all of my favorites, and it's too long to mention. I like Vixen--I like a few that are going to be spoilers, I'm not going to say. A few that...something I've never seen on the Suicide Squad; it's going to be interesting and I can't spoil it--part of the fun is going to be the reveal.

I went through the whole DC Who's Who issues--every single page of every one of those just making my list of all my favorite characters of all time just to build kind of a weird new team but keep some of them. Harley Quinn is still going to be there and Deadshot--those are like the heart of the team and I don't want to mess that up--then we're going to kill some people and bring some new ones in.

ComicBook.com: One everything shakes out, are these titles something that you can bring together and work your own little mini-crossovers or are you still going to be spread a little differently than that?

Kindt: You know, I have another monthly that I'm going to be doing later that's to be announced. Right now, honestly, I'm trying to coordinate all the Forever Evil tie-ins that I'm doing and I feel like in a way I'm collaborating with myself on like three different books and then also spinning off of what Geoff Johns is doing and riffing on what he's doing. After that I don't know. I have no idea. There's not a character in the DC Universe I wouldn't want to write because I don't feel like, "Oh, I want to do that guy or that guy." I would do them all. I think they all have an interesting story.